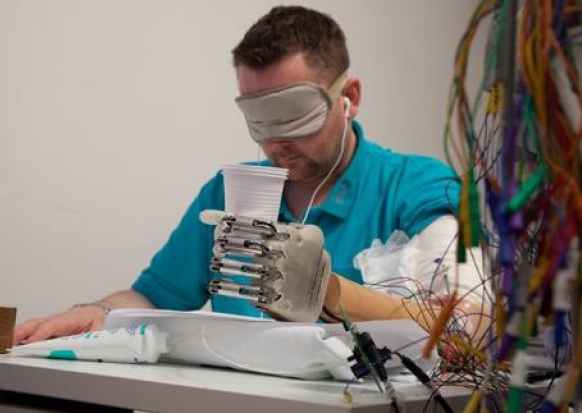 Dennis Aabo Sørenson from Denmark wired with the LifeHand 2 bionic prosthetic in 2013 was able to identify the shape and hardness of items through electrodes implanted in his nerves, while wearing a blindfold and ear buds too. photo credit: LifeHand 2 / Patrizia Tocci

In February, I wrote about innovations in bionic hands; specifically, how the newest prosthetics provide not only increased movement and dexterity, but can also move with input directly from the brain. The peripheral nerves that would normally drive the injured limb, are sensed and relay the commands directly to the motor units in the prothetic hand. It is very exciting to have the ability to move your artificial limb by just thinking about it, but what’s next?

Hands are very important for getting through the day. They help us take care of ourselves and others. I could not perform Plastic Surgery without a good pair of hands. Hands are extremely efficient for manipulating our environment and communicating. They protect and caress. It is difficult to compensate for the loss of a limb, especially an arm. While great strides have been made in fine motor control, it is really only half of the equation.

What If You Could Feel With Your Prothetic Hand Too?

The ability to grasp and assist with an artificial hand is great, but what if it could provide sensory feedback too? Accessing pressure, temperature, weight, texture and protective sensation are jobs our hands perform every day. Increasing sensory input in the artificial limb is the next frontier for artificial limbs.

Very exciting work is being done by Plastic Surgeons at the University of Michigan. Chair of the Division of Plastic Surgery, Paul S. Cederna, M.D., has received a $5,500,000 from the Department of Defense, Army Research Office, for the development of a totally biointegrated upper extremity control system. In other words, a system that allows one to move their artificial limb by thinking about it. In the June issue of Plastic and Reconstructive Surgery®, the official medical journal of the American Society of Plastic Surgeons (ASPS), Dr. Cederna and coauthors write, “The ultimate goal is to develop a prosthesis that closely mimics the natural limb, both in its ability to perform complex motor commands and to elicit conscious sensation.” The artificial limb should look, act and provide the feedback of a normal arm.

How To Feel With Your Artificial Limb 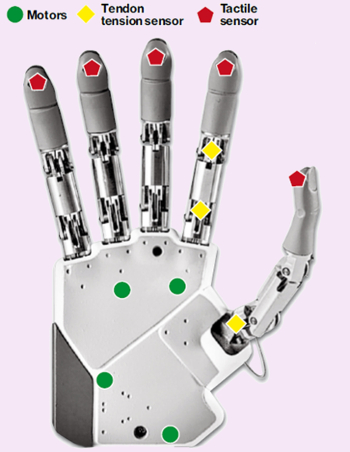 The hand pictured at the top of this article has evolved to the IH2 Azzurra Series from Prensilia. It is lightweight (640 grams), has its own embedded CPU and can produce a full strength grip with an 8 volt, 5 amp current.

Without sensation, you have to compensate with your eyes. You need to see what the limb is doing in order to get the feedback necessary to successfully complete a task. While this is still better than not having a limb, sensory feedback allows the wearer to feel their arm, and to not have to stare at their arm to make it work. Having to watch every move is a “cognitive burden” on the brain, relieving this burden is the goal of direct sensory feedback from the limb to the pathways our body already has developed to interpret this kind of information. Several techniques are available or are currently in development.

One method currently in use is Sensory Substitution, where one type of sensation is substituted for another. For example, and intact area of skin is fitted with a device that vibrates when the prothesis touches an object. This can be on the limb, or somewhere else on the body, and provides feedback for touch without visual cues. Advantages to this are that the devices can be simple and cheap, and since they are applied to the skin, surgery is not necessary.

Another technique involves directly stimulating the nerves. Similar to sensory stimulation, sensors on the prosthesis are sensitive to pressure. Instead of providing a vibratory stimulus, the prosthetic sensors stimulate electrodes placed in or near the nerves. By varying the sensors output, properties like stiffness, shape, and size can be conveyed. This allows the wearer to control fine-motor movements without having to look.

Targeted muscle reinnervation (TMR), involves the transfer of nerves to provide sensation to intact skin and muscles. TMR was developed to improve control of the prosthesis; however, by providing sensory feedback from the prostheses, the feedback loop of action, response and compensation is closed.

Sensory Regenerative Peripheral Nerve Interface (SRPNI) is more than just a mouthful. It is still experimental, and seeks to avoid the need for nerve electrodes, by providing an interface that transfers sensory signals directly from a prosthetic sensor to the remaining nerve. Another developing approach is using lasers to control nerve signaling. Potentially, this could be provided topically also, and may be a viable alternative to direct electrical stimulation of nerves.

For more details, you can read Dr. Cederna’s article: Providing a Sense of Touch to Prosthetic Hands online, in the June, 2015, edition of Plastic & Reconstructive Surgery.

What Plastic Surgeons Do 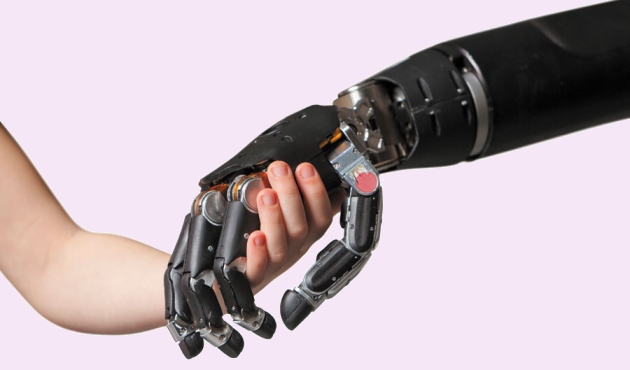