Breast Augmentation with Breast Lift was used to enlarge the breasts, elevate the nipple and tighten the breast skin, especially the skin that hangs at the bottom of the breasts. The technique used, a horizontal breast lift, does not require the vertical scar seen in the anchor or inverted-T type breast lifts.

The case above is an unusual lift in that a periareolar (defined below) and an inframammary incision (hidden in the crease beneath the breasts) were used, but there is no vertical scar. The “Horizontal Breast Lift” is great for breasts that have bottomed out or for breasts with more extreme sagging.

Smaller Breast Lifts require smaller scars. In the case above, a periareolar scar was used to reposition the nipple and reshape the breasts. Periareolar literally means “around the areola”. The areola is the pigmented skin that surrounds the nipple. While this does provide the smallest scar, it does the least. It tends to flatten the end of the breast and it is not great for reducing the size of the areolae.

The Breast Augmentation and Breast Lift combination with the smallest scar is the Periareolar Mastopexy Augmentation. An incision around the areola is used to raise the nipple and insert the Breast Implant. In the above case, the flattening effects of the periareolar lift are exploited to help reshape these tubular (tuberous) breasts.

For cases of Tuberous Breasts, flattening of the shape of the breast is a plus. It can be used to prevent the puffy nipple from sticking out like a cherry on top of a sundae. This patient’s breasts are narrow at the base, and the constriction gives a narrow, elongated, tubular breast. The Breast Implant helps to round the breast out, but it may not correct the areola when it is puffy. 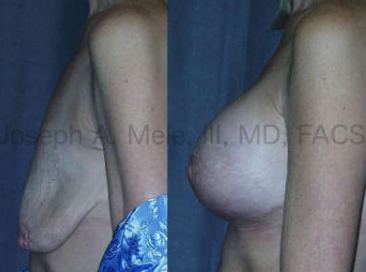 Severely deflated breasts, like those seen above after massive weight loss, need more volume and bigger lifts. An Anchor shaped scar was needed to raise the nipple, remove the overhanging lower breast skin and to tighten the breast skin in the horizontal direction, too.

Often, I will see on the Internet the misconception that if a big enough implant is placed, you will not need a lift. This is not true. Imagine an implant, the size of the one used above, placed under the skin of the pre-op picture. The breast would be the same size; however, the loose skin holding the nipple would hang off the end. In the above case, only a Breast Lift can correct the problems with the breasts’ shape, nipple position and excess skin at the bottom of the breast.

The ultimate goal of Cosmetic Plastic Surgery is a happy patient. So how can more scar lead to a happier patient? It all depends on the circumstances. If a scar is not needed, then more scar is bad. I have had patients on the borderline of needing a lift elect to not have lift because of the extra scar. Some are happy with their decision of not completely correcting the sagging, and not having extra scars. Others have come back for a Breast Lift after their Breast Augmentation, and are much happier now, after the Breast Lift. Staging does make it easier to see what each procedure has to offer the final result.

The main goal of Cosmetic Plastic Surgery is a pretty result. The Breast Augmentation Lift allows for control of both the size and the shape of the breasts. The cost is additional scar. In this case, an Inverted-T scar was needed.

Above, an inverted-T Breast Lift was performed along with placement of a Breast Implant. A periareolar lift would have left the nipples low, the areolae much larger and the end of the breasts flat. A vertical lift would not have tightened the lower pole sufficiently, or coned the shape of the breast as beautifully. In my experience, the incision underneath the breasts is well hidden. By keeping its length short, the scar will hide in the shadow under the breasts.

If you are considering a Breast Augmentation, Breast Lift or the Combination Augmentation Mastopexy, be certain to consult an experienced Board Certified Plastic Surgeon. While there are advantages to combining the procedures, it is also more complicated than both procedures done separately.

If you are in the San Francisco Bay Area, give me a call at (925) 943-6353, and schedule a private comprehensive consultation. Your options will be reviewed and the best course selected to optimize you breast aesthetics.