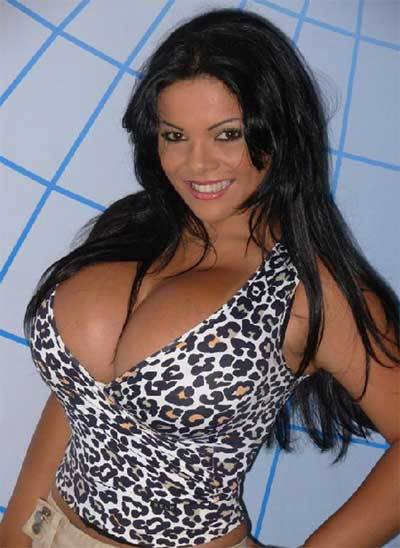 Sheyla Hershey is a Brazilian born, Houston resident, who is most famous for the size of her breasts. She made national headlines early in 2009, when she wanted to increase her bust from 38FFF to 38KKK and ran into a Texas sized roadblock. Apparently, “Everything is bigger in Texas,” has its limits when it comes to breast implants. Unable to have larger implants placed in Texas, she returned to her native Brazil for the surgery.

Sheyla is again making headlines. Sadly, this time it is for complications of her breast augmentation. Earlier this summer she developed an infection around her implants, necessitating their temporary removal. On her blog this morning, Sheyla shares that she is doing well at home recovering from her surgery last Thursday. She also plans to have her implants replaced. This is usually done after the infection has cleared and the injury has healed — three to six months after surgery, and sometimes longer.

Breast implant infections are one of the complications covered on all breast augmentation informed consent forms. While rare, infections after breast augmentation can occur. Most are superficial infections that clear with oral antibiotics; however, deep infections can also occur. These are more serious and may require intravenous antibiotics and even hospitalization. When the infection is deep, around the implant, sometimes the only way to clear the infection is to remove the breast implants and leave them out for several months while the body heals.

Bigger is not always better. Larger breast implants put more strain on the body’s systems. The stretch and compression of a large breast implant decreases the circulation in the surrounding soft tissues. Less circulation means decreased oxygen delivered, fewer white blood cells, and lower levels of antibiotic delivery to the breasts. Larger implants also create a larger potential space in which the bacteria, usually staph, can hide. All these factors make it harder for the infection to clear.

Breast implant infections are much more common after breast reconstruction than after cosmetic breast augmentation. The additional insult to circulation that results from the mastectomy is just one contributing factor. Tissue expansion is often used to stretch the skin which remains on the chest. This is done to compensate for the skin removed during the mastectomy. Chemotherapy reduces the bodies ability to fight infections, though this is usually temporary. Radiation causes injury to the skin and chest wall. One effect is scarring of the blood vessels. This causes a long term decrease in circulation that gets worse with time.

What are the Chances of Breast Implant Infections?

Infections can occur any time the skin is cut. Most surgical infections appear within a few days to weeks after an operation. The risks of getting an infection after any “clean” surgery, like breast augmentation surgery, is 1%. If you have an infection anywhere in your body at the time of surgery, your risk of a breast implant infection will dramatically increase. This is one reason I sometimes have to postpone elective cosmetic surgery. It is better to be inconvenienced than to take the risk of getting a postoperative infection and losing your breast implants.

While no one likes dwelling on everything that can go wrong in life, if you are considering elective cosmetic surgery, like breast augmentation surgery, it is important to review the risks and well as the benefits. While complications like infection are rare, remember, the more the limits are pushed, the greater the risk.