Below is a nasal surgery (rhinoplasty) video from a recent appearance on KRON, channel 4. The show is Body Beautiful with host, Vicki Liviakis. What follows is part 2 of a 4 part special presentation on cosmetic nasal surgery (nose jobs). Rhinoplasty before and after pictures are included and a closely related procedure, chin augmentation (chin implants) is also discussed.

If you have questions about nose surgery, please give me a call at (925) 943-6353, or use the contact form on the left. Additional information and links are also available at the end of this post. The 800 number in this nasal surgery video was only for viewers to call in during the live show. 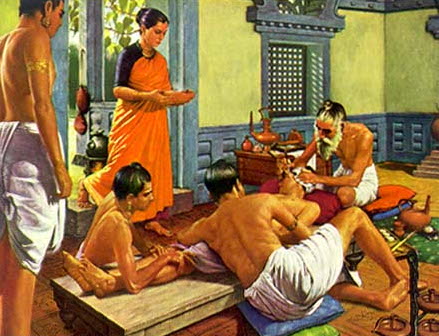 Sushruta - The Father of Indian Surgery and Plastic Surgery

While many consider plastic surgery a relatively new discipline, its origins are documented more than 4000 years ago by the Indus River Civilization of India. In Sushruta’s Compendium (around 1000 BC – 600 BC), Sushruta documents ancient medicine, surgery and midwifery 150 years before Hippocrates.

The Nose Job is one of procedures which defines early Plastic Surgery, and Sushruta is credited as the first to describe the details of rhinoplasty. His compendium shows clearly that surgery and cosmetic plastic surgery have always been linked. Sushruta’s techniques spread from India to Persia, Arabia, Egypt and eventually Europe, and some methods are still used today.

In the next part of this series Rhinoplasty (Nasal Surgery) San Francisco Bay Area (Cosmetic Nose Job) Part 3 of 4) we will jump forward a few thousand years to Gaspare Tagliacozzi, the Father of “Modern” Plastic Surgery.

This is part 2 of 4 in a video series on Rhinoplasty (Nasal Surgery) in the San Francisco Bay Area. Additional segments can be found here: