Plastic Surgery of the Ear is one of my specialties. Otoplasty is an outpatient surgical procedure that includes the correction of prominent ears, lop ears and injured ears including torn earlobes and cauliflower ear deformities. 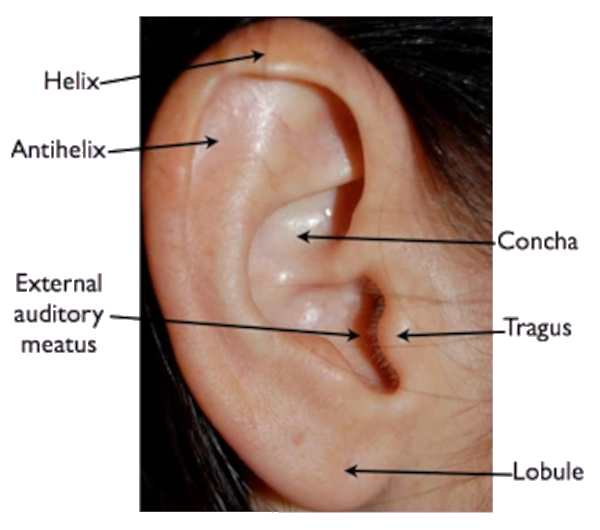 Knowing the names of the most prominent ear parts can help when discussing Otoplasty with your plastic surgeon, but pointing to the area that concerns you also works.

The Normal Ear shape is very complex. Plastic Surgeons have names for every bump, divot and curve. The complex folds that form the adult ear are the result of the fusion and folding of six separate swellings, each containing skin and cartilage. The last step in ear development is the formation of the antihelical fold. This fold is important in positioning the ear closer to the side of the head. When this folding stops prematurely, the ears are left sticking out.

Congenital Ear Deformities are something we are born with, and the correction of Prominent Ears is the congenital ear deformity most often corrected by plastic surgeons. The most common cause of ears which stick out is incomplete folding of the anti helical fold, but an enlarged concha, the part of the ear which catches sounds, can also contribute. Both these problems are compounded when the concha of the ear is also rotated forward.

Other common congenital deformities which are corrected with Otoplasty include Lop Ear, when the top of the ear is folded over or cupped, and Spock Ear, which looks like the famous Star Trek character’s ear. The medical term for this is Stahl’s Ear.

Otoplasty literally means ear changing. The most common Otoplasty is prominent ear correction. During the procedure, an incision is made behind the ear, the supporting cartilage is reshaped, and the incision is carefully closed, hidden by the newly tucked ear.

Otoplasty Before and After Pictures

These otoplasty before and after pictures show the correction of prominent ears. The concha was reduced and rotated back, while the edge of the ear was also folded back against the side of the head.

Above is an example of Otoplasty for Prominent Ears. More before and after pictures are available for viewing on the DrMele.com Otoplasty Information Page.

If you are considering Cosmetic Ear Surgery call (925) 943-6353. I can review your concerns and explain the options. Each ear is different, so an in-office consultation is the best way to learn what can be done in your specific case. My Walnut Creek Plastic Surgery Office is located in the San Francisco East Bay Area and ready for all your Otoplasty needs.