Otoplasty corrects a variety of ear deformities. The most common type of Otoplasty is Ear Pinning for the correction of prominent ears, or ears that stick out. What is Otoplasty? How long is the recovery? I’ll answer these questions and more in today’s San Francisco Plastic Surgery Blog post.

How Old is Old Enough for Otoplasty?

Prominent ears are present at birth. There is some evidence that immediate splinting can change the shape of the external ear, but it needs to be started in the first weeks of life. After a few months, the shape is unlikely to respond to molding.

Since the ears are 75% of their adult size at age five, anyone over the age of five is a candidate for ear pinning.

Most Plastic Surgeons recommend waiting until age five before having Ear Pinning. The ear reaches 75% of its adult size by age five. By waiting, it is less likely that the ear prominence will recur. The Ear Pinning Before and After Photos above show the results of a typical Otoplasty.

While I treat a lot of young children, another larger group of otoplasty patients is young adults. Patients in their 20’s and 30’s often have been bothered by their ears for decades before seeking care.

Otoplasty is used to reduce the appearance of prominent ears.

Adult ear cartilage is often thicker and stiffer than that of children. As a result, additional techniques may be necessary in order to achieve and maintain the best results.

Women have Otoplasty, too. Many patients are reluctant to wear their hair up if they are concerned about prominent ears. Long hair covers the ears, but can get annoying if you are active, especially in the hot summer months. Having the option to confidently pull the hair into a ponytail is very desirable. 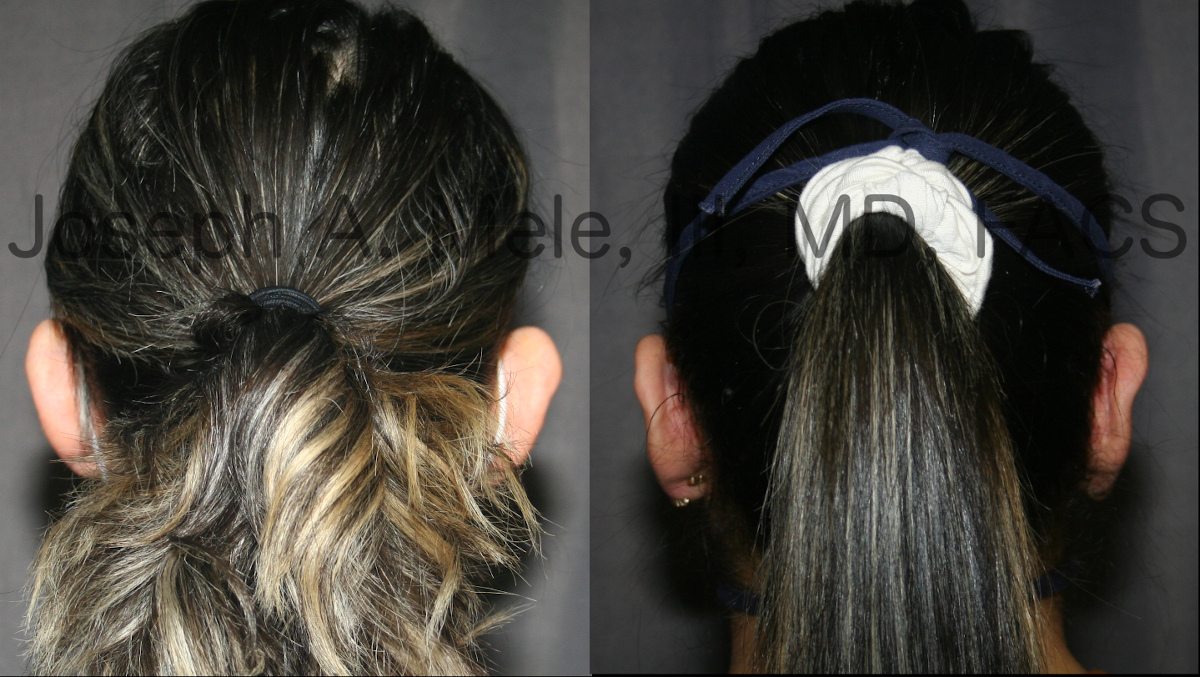 Mandatory face mask use has made Otoplasty a challenge the last few years. No ear loops are allowed after surgery.

Men typically have shorter hair; though I have had male patients who strictly chose longer hair to hide their prominent ears. Many of my male patients also express concerns about visible scars after otoplasty. Fortunately, the incisions are behind the ears and are very discreet.

Short hair is not a problem after Otoplasty. The scars are hidden in the folds behind the ears.

The patient above had large and anteriorly rotated conchae, the part of the ear that catches sound. In addition, he lacks the normal folds that bring the ears closer to the head. In this case. The ear folds were created, the conchae were reduced and rotated backward to relieve his ear anxiety.

What is Otoplasty Recovery?

Recovery takes a week or two. You can expect to be sore the first few days. A large head wrap is needed for the week after surgery to maintain the shape achieved with surgery. A headband is used at night for three months.

To schedule an Otoplasty appointment for yourself or your child call (925) 943-6353 at our San Francisco Bay Area plastic surgery center. During your consultation, your questions will be answered, and your options reviewed, so that you can make the decision whether Cosmetic Ear Surgery is right for you. Otoplasty is not the most commonly performed cosmetic plastic surgery procedure, so be sure to consult with an experienced, Board Certified Plastic Surgeon for your ear pinning.