Otoplasty literally means “ear changing.” And for anyone who is bothered by prominent ears, it can also be life changing. Ear Pinning often removes many of the self-imposed limitations that those with prominent ears feel are necessary.

Ears that stick out may limit one’s choice of hairstyles. Often, those with prominent ears try to hide them with long hair or even hats. Short haircuts may not be a comfortable option. Not being able to cut, or at least wear your hair up, in the hot summer months can be uncomfortable.

If you participate in sports or are required to conform to a uniform at work, long hair or hats aren’t ideal. I have had patients refuse promotions because they knew it meant cutting their hair.The issue wasn’t their hair, but what was under it. The embarrassment caused by prominent ears needn’t be a limiting factor in participating in whatever you choose, because a relatively short, outpatient surgical procedure called Otoplasty offers a solution.

Otoplasty Before and After Pictures – Asymmetry 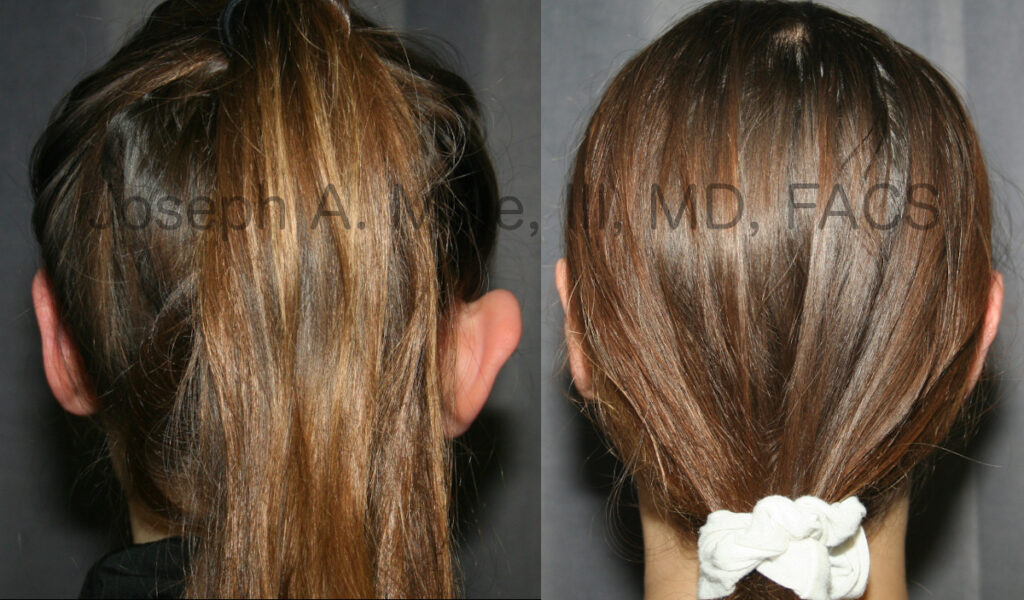 Prominent Ear Reduction with Otoplasty (Ear Pinning) before and after pictures. Sometimes one side is much more prominent than the other.

Asymmetry is normal with ears. Sometimes one ear is bigger, higher or sticks out more. In the case above, her right ear is noticeably more prominent than the left. Even her long hair could not completely cover it.

Otoplasty was performed to reduce the prominence of her ears. When a patient is happy with one ear, but not the other, surgery can be performed solely on the prominent ear to provide balance. The result is improved symmetry that can provide a boost in self-confidence.

Men often have shorter hair styles than women which makes hiding prominent ears challenging. However, some men are reluctant to pursue Ear Pinning for fear that the Otoplasty scar will be noticeable. 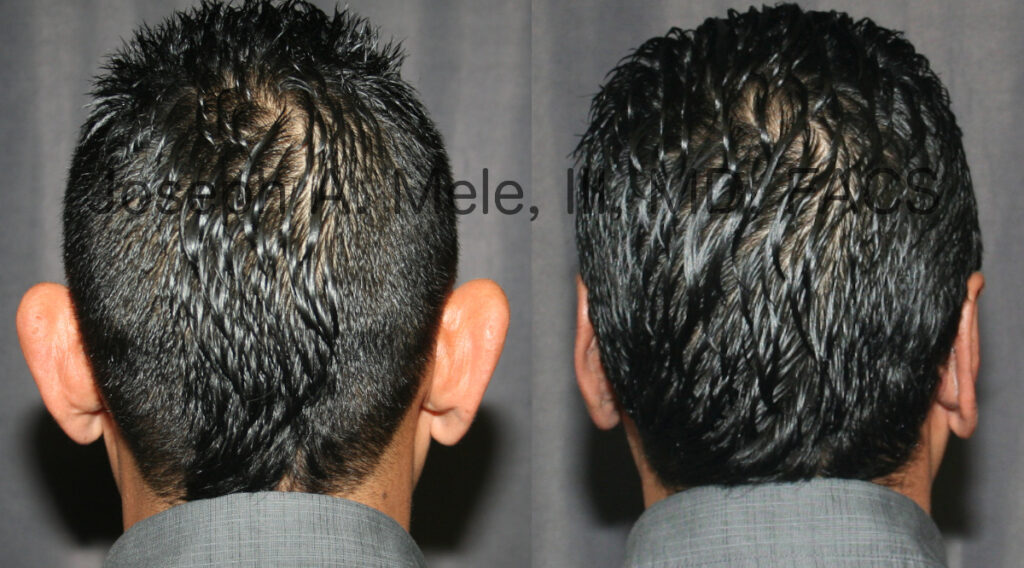 Otoplasty for men can be more challenging due to the preponderance of men with short hair.

The patient above had Ear Pinning Surgery to reduce his prominent ears. Preoperatively, he was concerned with the location of the surgical incisions and visible scars. Fortunately, Otoplasty is performed primarily from the back of the ear with incisions in the fold behind the ears. The primary goal of the surgery is to reduce the prominence of the ears. After the ears are folded closer to the head, the folds are tighter, making the Otoplasty Scars even more discreet. The procedure provides safe, effective treatment via an inconspicuous approach.

I know I have done a good job when my patients come into the office with their hair up. Otoplasty is very satisfying for patients that are bothered by prominent ears. Athletes can confidently participate in sports, even when required to tie back their hair during competition.

I’ve also noticed that prior to surgery some patients would not pierce their ears, or wear earrings, to avoid bringing attention to their ears. After surgery they may feel comfortable getting their ears pierced. I usually recommend waiting until three months after surgery for ear piercing to be safe.

While women with long hair can cover their ears, often prominent ears still stick out, and wearing the hair up is often avoided, or at least minimized.

This patient enjoys wearing her hair up after her Ear Pinning. The before picture shows that the upper ear was disproportionately prominent before surgery. This occurs when the upper fold of the ear does not completely form. Otoplasty is used to complete the formation of this fold. The result is a natural reduction in the ear’s prominence that looks normal.

The concha is the cupped part of the ear that catches sound. Sometimes the ear is prominent because the concha is disproportionately large, or it is rotated forward. Otoplasty is tailored to each ear. In this case, the concha was reduced and set back to bring the ears closer to the head.

This patient’s ears fold differently before surgery, so improving symmetry is also a big part of otoplasty.

Schedule an Otoplasty appointment for yourself, or your child, in the San Francisco Bay Area, by calling (925) 943-6353. During your consultation, your concerns will be heard and your options discussed in detail so that you can make the decision whether Otoplasty is right for you. Otoplasty is not the most commonly performed cosmetic plastic surgery procedure, so be sure to consult with an experienced, Board Certified Plastic Surgeon for your ear pinning.