On April 29, 2015 the US FDA Approved Kybella. If you are considering Kybella read on for more information from the San Francisco Plastic Surgery Blog. I’ll cover the good, the bad and the ugly. 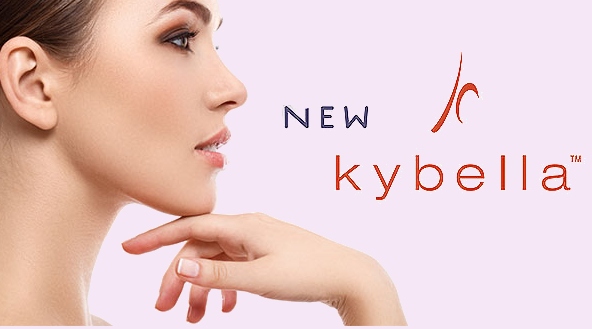 Kybella is the first drug FDA approved to dissolve fat.

Kybella, also known as ATX-101, is deoyxcholic acid. It sounds like a mouthful, but you already know how to make it. Deoyxcholic Acid, or Deoxycholate, is a bile acid that is released by your gall bladder to help digest fat. The manufactured Kybella and the bile acids are chemically identical. Bile acids emulsify fat, much like dish soap, so that the fat can be broken down and absorbed by the gut. Deoyxcholic Acid has been used with phosphatidylcholine for mesotherapy; however, only Deoxycholate has received FDA approval.

When properly injected into submental fat, the fat under the chin, the drug destroys fat cells; however, it is not discriminatory. It can also destroy other types of cells, such as nerves and blood vessel. It can also destroy skin cells, if it is inadvertently injected into the skin. It is very important that Kybella, like Liposuction, be provided by a licensed professional who has been properly trained.

How is Kybella Administered?

Kybella is administered as an injection into the fat tissue in the submental area. Patients may receive up to 50 injections in a single treatment, with up to six single treatments administered no less than one month apart. Kybella is being provided in single patient use vials and should not be diluted or mixed with any other compounds. The vials have a hologram on them to prevent counterfeiting, and you should ask to see the unopened, hologram containing vial before your procedure to be certain you are getting the right stuff. If there is no hologram, do not use the product. 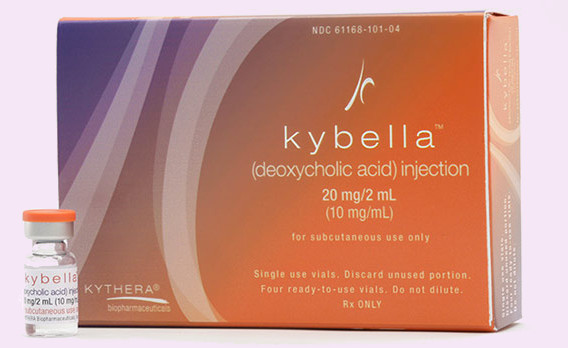 The official Kythera packaging for Kybella and the holographically labelled single patient use vial.

Where Can I Get Kybella Injections?

What Are The Side Effects Of Kybella?

The usual worries from injections apply:

Nerve Injuries occur because Kybella kills cells. Temporary weakness or paralysis of the muscles controlling the mouth occurred in 4.3% of the Kybella pivotal study population. In the placebo group, only 0.4% of the population had temporary paralysis. The average duration of injury was 42 and 85 days respectively. To reduce the risk Kybella should not be injected above the lower aspect of the mandible. This percentage of nerve injuries with Kybella is much higher than I have seen with liposuction of the same area.

Skin Ulcerations that occurred tended to be small areas that healed in a few weeks. Skin ulcerations can potentially be reduced with proper injection techniques. Since Kybella kills cells, injecting Kybella into the skin, or too superficially, results in death of the skin and an ulcer. This may not be avoidable in people without enough subcutaneous fat, but then again, people without subcutaneous fat should not be treated with Kybella in the first place.

Dysphagia, or problems swallowing, occurred in 2% of Kybella treated patients, and 0.2% of the placebo treated controls. Most episodes occurred 1 to 5 days after treatment, were described as mild and resolved in a few days.

Why Patients Dropped Out Of The Kybella Study

About one-third of patients had to stop treatments due to insufficient remaining submental fat. About 10% stopped because they were happy with the results. The most common reasons for study discontinuation were patient convenience and loss to follow-up. The percentage dropping out was greater for the Kybella treatment group than the placebo group, most likely because Kybella shots hurt more. The common most adverse reactions leading to discontinuing Kybella treatments were injection site pain (1%), injection site anesthesia (0.8%) and injection site swelling (0.8%).

The amount of fat under the neck was measured with an MRI scan. Response was defined as a 10% reduction in submental fat. Even with this relatively low bar, less than half the study population was considered MRI responders (40.2% to 46.3%). Only 5.2% to 5.3% of placebo treated controls were MRI responders. On the other hand, the same populations showed improvement in satisfaction in 47% to 50% of patients in the Kybella group compared to 15%-20% in the placebo group. Compared to the 91% “worth-it” rating that liposuction receives on Real-Self.

Who Is A Candidate For Submental Fat Reduction?

There are three factors that must be true for you to be a good candidate for Liposuction:

Despite what other articles you may find on the Internet, Liposuction and Kybella do not shrink skin. The skin shrinkage comes primarily from the elastin fibers in the skin, and represents the natural recoil of the skin. Thus liposuction and Kybella is not right for everyone. For liposuction, Patient Selection is an important component in obtaining good results. It will not work for everyone, and adding lasers, ultrasound, radio-frequency or other voodoo does not help significantly. Healing may take weeks or months and may be significantly prolonged in certain individuals such as smokers and diabetics. 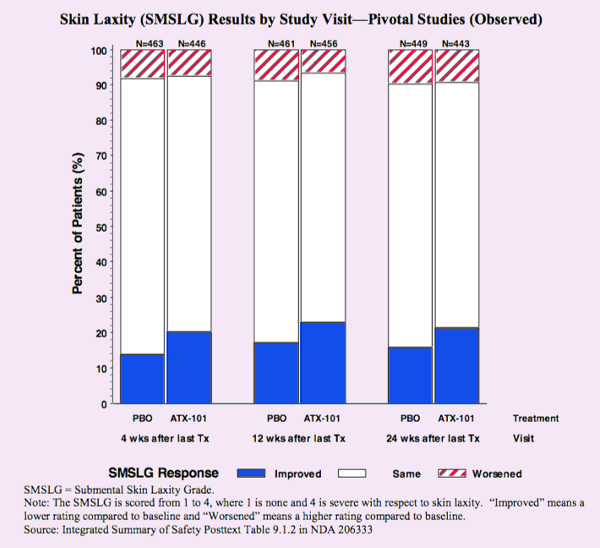 When compared to placebo (PBO), ATX-101 (Kybella) did not provide significant improvement in laxity.

As expected, the short answer is no. The results graphed above show no improvement in skin laxity for Kybella (ATX-101) compared with placebo (PBO) at 4, 12 and 24 weeks. The majority of both groups show no change in skin tightness. Both groups also show about 10% of patients with worsened (more) skin laxity. The placebo group had 15% with improvement. Why is the placebo affect always 15%? The Kybella group had about 20% with improvement, not a statistical difference. The range of improvement 15% to 25% is about the same as seen with tumescent liposuction with or with lasers, ultrasound, radio-frequency or other destructive energies added.

Consumers and health care professionals are encouraged to report adverse reactions from the use of Kybella to the FDA’s MedWatch Adverse Event Reporting program at www.fda.gov/MedWatch or by calling 800-FDA-1088.

Kybella is manufactured by Kythera Biopharmaceuticals Inc. based in Westlake Village, California, and was recently purchased by Allergen for 2.1 billion dollars.

We are always looking for faster, cheaper and more convenient ways to get what we want. I am not sure Kybella is there yet. Six treatments over six months versus one treatment for liposuction does not say faster, cheaper and more convenient to me. With an increased risk of nerve injury, a limitation in areas treated, minimal fat reductions, no improvement in skin tightening and lower patients satisfaction scores, I will not be injecting bile acid into my patients’ necks for now. I will be watching from the sidelines, and still searching for the skin-shrinking-ray.