Since I opened my San Francisco Bay Area Plastic Surgery office in 1997, the demand for Plastic Surgery Procedures has increased almost 300%. Both surgical and nonsurgical procedures have improved and advanced over the last 17 years. Women account for 90% of all plastic surgery patients, but men have kept up their demand, too. Plastic surgery procedures have adapted to allow women to achieve more feminine, and men more masculine, results. The Mommy Makeover has been well described, but for Father’s Day, I thought some Manly Makeover information might be appropriate. We will explore a new topic today, the Daddy Makeover.

Before and After Gynecomastia Reduction – A well defined masculine chest is hard work, but sometimes being in incredible shape is still not enough. This patient works very hard for his physique. He had small amounts of natural breast tissue (gynecomastia) behind the areolae, his left greater than right. 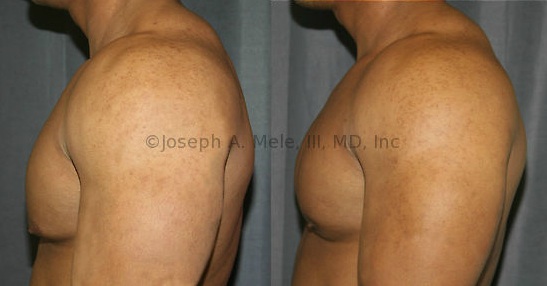 Gynecomastia Reduction provided smaller areolae, improved symmetry, elevation of the left nipple and removal of the stigma of possible steroid use. The difference in projection of the tissue beneath the nipple, before and after gynecomastia surgery, is best seen on the lateral view.

Gynecomastia Reduction is a uniquely male plastic surgery, and one of my specialties. The before and after pictures above show how plastic surgery can complement a good workout ethic. This gentleman works hard to look this good, but was still bothered by Gynecomastia. What looks like a small change is not simple to achieve, but it makes a big difference in how tight muscle shirts fit. With the workouts he puts in, he deserves to look great.

Many of the common non-surgical enhancements available today were either not approved or nonexistent in 1997. Now, you can’t walk down Main Street, USA, without seeing advertisements for Botox and Fillers. Botox was part of my training, but the use of Botox for wrinkles was an off-label use then. The first approved botulinum toxin was Botox Cosmetic (Onabotulinumtoxin A). Botox Cosmetic was approved by the FDA in April 2002, for the treatment of moderate to severe glabellar lines (frown lines) in men and women, ages 18 to 65. Any other treatments, while often safe and effective, are still considered off label.

Botox then and Now

Men often request Botox or Dysport treatments to reduce frown lines. These are the lines that form between our brows when we frown, concentrate or squint. No matter the reason, these lines make men look angry and less approachable. The treatment of these rhytids (wrinkles) involves an injection into the paired corrugator supercilii muscles and the procures muscle, to relax the central brow, and mute the ability to frown. Not frowning might make you feel better too, see: Darwin, Depression and Botox on the San Francisco Plastic Surgery Blog.

Fillers, like Restylane, Juvederm, Perlane and Radiesse were not around in 1997. Collagen ruled the world, and was the only available wrinkle filler. For the fine wrinkles in and around the lips, Collagen worked better, but it didn’t last long. Collagen would begin to absorb the minute it was injected. This was the main reason for overdone “Collagen Lips.” A ten percent “over correction” was normal to help prolong the results.

Current fillers last longer, are softer and give more natural results than Collagen. While not permanent, these fillers do not absorb immediately. Each provides a prolonged period of stable augmentation, after which it slowly absorbs. This eliminates the need for over correction. There is some swelling the first few days, however, so the “Trout Pout” has not been eliminated.

Dermal fillers, like Perlane, Restylane and Juvederm, are used to soften the naso-labial folds that extend from the sides of the nose around the corners of the mouth.

Dermal Fillers are most used to soften the lines that run from the nose to the lips, the naso-labial folds. Men and women have them, and they tend to be a more masculine trait. It is no surprise that most naso-labial fold treatments are done for women, but even for men, sometimes less is more. Deeper lines tend to age the face, so often the lines are reduced with a little filler. In Male Facial Plastic Surgery, deeper naso-labial folds may be more masculine, but softening them can often give a more relaxed and rested appearance. Fillers are also used to augment the face. Stronger cheeks, chins and noses, all more masculine features, can be created with the use of dermal fillers. 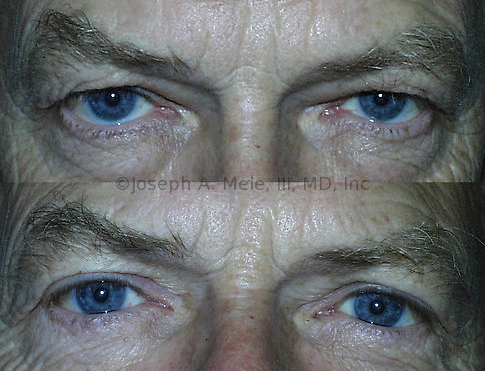 The Male Eyelid Lift (Male Blepharoplasty) above was performed to improve sight. Upper and lateral (outer) gaze was blocked by overhanging skin. Just look were his pupils are. The Upper Blepharoplasty lifts the eyelids without distorting the eyebrows. Bags beneath the eyes were also reduced with a Lower Blepharoplasty. Comparing the upper and lower (before and after) pictures, he looks less angry and tired and more friendly and rested, yet remains recognizably male.

For the face, men tend to have lower brows (Ladies, please no snickering), heavier upper eyelids, stronger chins and larger noses. These normal differences in male anatomy, and the difference in male hair patterns, need to be considered in all Facial Plastic Surgery Procedures.

Above – Liposuction is used to remove the Male Muffin Top to create a more fit and masculine, inverted pyramid shape.

The male body is less curvy. The Liposuction before and after pictures above come from the recent San Francisco Plastic Surgery Blog article about treating the Male Muffin Top. In general, the masculine chest is a reversed pyramid, and below this it’s fairly straight down to the thighs. The male chest is wider, the breasts are smaller and even the nipples and areolae are in different positions with different shapes. The details are sometimes subtle, but always worth noting. For Male Body Shaping, the procedures are modified to better suit the ideal male shape.

It’s another beautiful day in the San Francisco Bay Area, and my children are up to enjoy their first day of summer vacation. I hope you have the time and opportunity to enjoy your Father’s Day. If you have questions about plastic surgery, give me a call at (925) 943-6353 or use the contact form in the margin and I will be in touch.