Inverted Nipples, a source of embarrassment for some women, and men, can be corrected with a simple office procedure, performed under local anesthesia.

This perfectly formed nipple was hiding. A simple in office inverted nipple repair corrected the problem.

The presentation of Inverted Nipples ranges from a Shy Nipple that everts spontaneously with minimal stimulation, to a nipple that disappears around puberty, and becomes permanently buried as the breast develops. In severe forms, sometimes even the areola, the pigmented skin around the nipple, also becomes inverted.

The Problem with Inverted Nipples

Often the nipple becomes inverted during puberty, but sometimes it does not occur until pregnancy.

Inverted nipples can sometimes make breastfeeding more difficult. As you can imagine, without a prominent nipple to latch onto, an infant may not be able to breast feed. A breast pump will often work as an alternative method to supply breast milk. While inverted nipples can be surgically repaired before pregnancy, the surgery itself can increase the risk of decreased milk production through the nipple. Sometimes the nipple will come out spontaneously with pregnancy, so often repair is delayed until after childbirth. On the other hand, sometimes a normal nipple will become inverted with pregnancy.

The procedures used for Inverted Nipple Correction are quite varied, and can be tailored to the degree of inversion. The correct diagnosis is very important for a successful repair. Inverted nipples, cleft nipples, hooded nipples and absent nipples all require different types of correction. 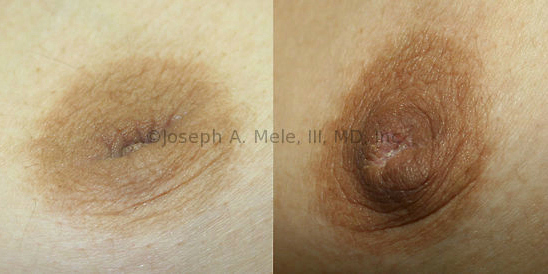 For more information about the Correction of Inverted Nipples call our San Francisco Bay Area Plastic Surgery office at (925) 943-6353, or use the contact form on the left. Additional online information is available on DrMele.com and SanFranciscoBreast.com.