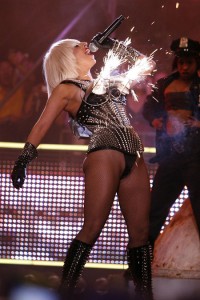 The world is crazy. There has been a lot of chatter about terrorists implanting women with exploding breast implants in a effort to crash planes. But first, if you are reading this to find out if your normal, non-explosive, breast implants will explode the next time you board an airliner, rest assured, they won’t.

Why Your Breast Implants Won’t Explode in the Airliner

Airliners are pressurized, and must be maintained to atmospheric pressures below 8000 ft. While the air inside our ears and belly expands, the fluid inside breast implants barely does. Cabin pressure regulations are more complex than you might think. (Reasons for maintaining cabin pressure and the allowed tolerances can be found on Wikipedia’s Cabin Pressurization page.)

While Lady Gaga is red hot, and her fans may enjoy the visual, there is nothing entertaining about the sudden loss of cabin pressure. That would be a terrorizing event. TSA would not allow her to board with the outfit pictured to the left, the concern is that explosives inside a breast implant would be difficult to detect.

If you are still worried about your non-explosive breast implants, in the event of a complete loss of pressurization, your breast implants would easily survive the pressure change. Since they are mostly water, the breast implants would expand about the same amount as the rest of body. (I will not elaborate on all the real problems that would occur elsewhere in the body, but Wikipedia has a page on uncontrolled decompression with many unpleasant facts.)

It sounds like a script contrived for a Hollywood movie: terrorist implanting their breast with PETN filled breast implants. The idea of surgically implanting an explosive inside the body is horrifying. Though from the terrorist’s perspective, it is only a short leap past strapping on a bomb. The worst part is, it is entirely possible. A small amount of explosive would be enough to disrupt cabin integrity, and cause explosive decompression with devastating results.

It’s not surprising that the possibility was broadcast this February in Los Angeles.

But by March it has made world headlines on Fox News and The Sun. and the story is now being given further credibility by the need to discredit the report on True/Slant with science and with satire.

Yes. With enough determination and thought, anything is possible.

No. I’m no terrorist, but there must be easier ways.

There is a fine fine line between a cautious and phobic. The reality is, we could spend our entire lives worrying about what could go wrong, and become paralyzed.

As a plastic surgeon, the surgery I perform is elective and is held to a higher standard. While I worry about the complications of surgery, this is my motivation to achieve safer and more predictable results, day after day. This is why I spent years in training to become a Board Certified Plastic Surgeon. This is why I operate only in Accredited Surgery Centers, and use only Board Certified Anesthesiologists. This is why my patients trust me, and can keep their thoughts on the goal, rather than the process. No matter how bizarre the news from the outside world, when I am performing surgery, there is only one thing I am thinking about — my patients well being and happiness, and there is no greater gift I can give this crazy world than a happy patient. ( …and non-explosive breast implants)