Earlobe Reduction is used to create an earlobe which is proportionate to the rest of the ear. Large earlobes can be a source of embarrassment for patients, and they are excited when they learn that Oversized Earlobes can be surgically reduced. 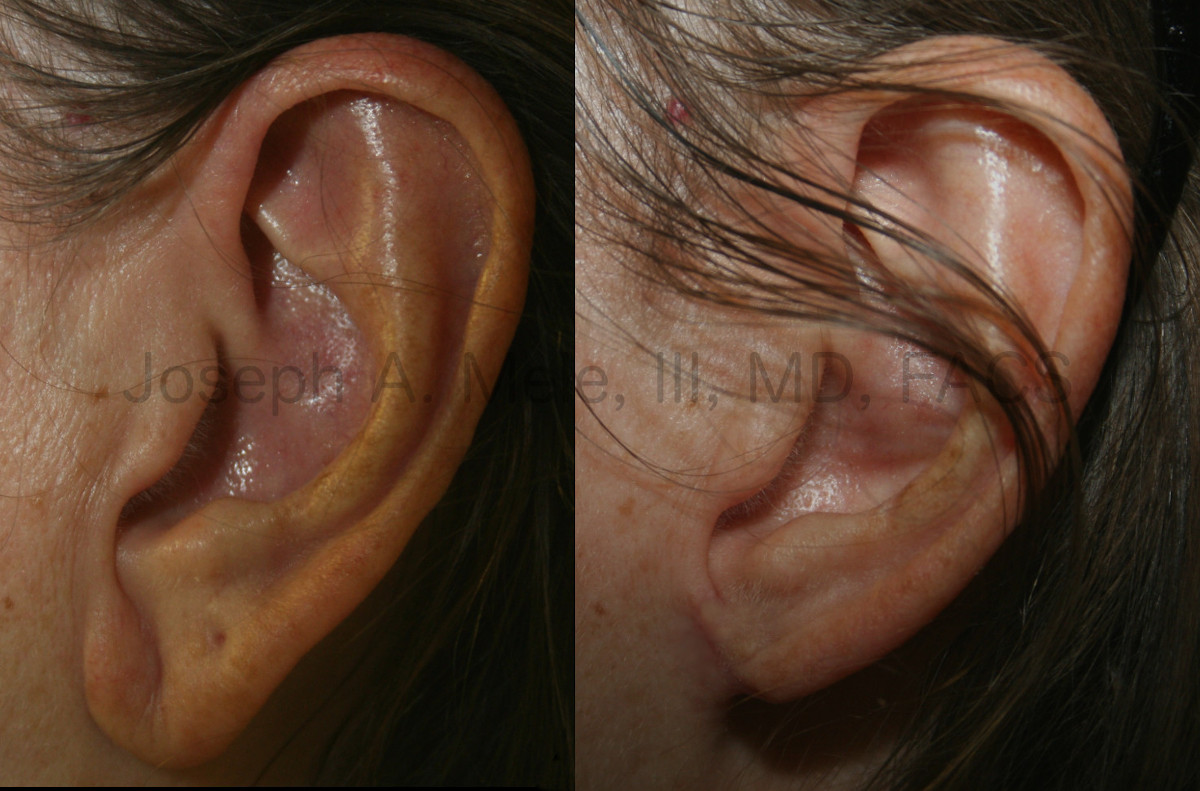 The above Earlobe Reduction before and after pictures show a reduction in both the size of the earlobe and the overall height of the ear.

The patient above complained that her ears were too big. I typically hear that when the ears stick out and the patient wants them pinned. However, in this case, her ears were flush against her head, Instead, her ears were long, especially the earlobes. By reducing her earlobes, the overall height of her ears is reduced. You may have noticed, her ear piercing was removed as part of the resection. This is easily corrected by repiercing the earlobes once the reduction has healed.

These Earlobe Reduction before and after pictures show, in the central photo, the large amount of earlobe that was removed.

This patient complained about having fat earlobes. Unlike normal earlobes, her earlobes were as wide as the center of her ear. The purple line shows where the incision was made. The portion of the earlobe below and in front of the line was removed. The residual skin was rotated forward, and approximated back to the side of the head. Absorbable sutures were used, and after a couple weeks the repair is usually quite strong. During the early recovery period, caution should always be used when pulling clothing over the head to protect the repair from inadvertent damage.

Converting a Hanging (Detached) Earlobe to an Attached Earlobe

The above Earlobe Reduction before and after pictures show the transition of a long, hanging, detached earlobe into a short, attached earlobe.

Postoperative care consists of topical antibiotic ointment, followed by topical silicone to fade and soften the backward “seven” scar seen in the after photo.

Earlobe Reduction before and after pictures with the intraoperative view.

Sometimes the earlobe is large and rotated away from the head. The central picture above shows the intraoperative view. The incision was closed as a backward seven to both reduce the size of the earlobe and to raise it up. The final photo is after the scar has matured.

The end result of this earlobe reduction is a happy patient with improved ear size and shape that can proudly adorn them with a new piercing and earrings.

If you are considering Earlobe Reduction, Otoplasty or Facelift Surgery, call (925) 943-6353 to schedule your appointment. Our San Francisco Bay Area Plastic Surgery Center specializes in Cosmetic Plastic Surgery of the face and body.