Prominent ears, and other ear deformities, are usually present at birth. About 30% correct themselves with normal aging, but the majority will require treatment for correction. There are many variations, but protruding ears are the ear deformity that is corrected most frequently with Otoplasty.

The television segment below is from the San Francisco Bay Area News Station KRON 4’s Body Beautiful. In this Otoplasty Video, I discuss the Correction of Prominent Ears, and include a few examples of Otoplasty Before and After Pictures. Any advice offered in this video is true in general; however, individual treatment recommendations can only be made after a consultation, which includes a medical history and physical examination.

For the first few days of life, the ears can be molded. The mother’s estrogen, makes the ear’s cartilage soft, allowing a brief window of time in which to actively reshape the ear. According to research from the Department of Plastic Surgery University of Texas Southwestern Medical Center, treatment started within the first few weeks after birth can be as high as 90% effective, and avoid the need for surgery. If you notice your newborn has an irregular shape to their ear, be certain to mention this to your doctor and see if Ear Molding is an option.

The five-year-old’s ear is already 85% of its adult size. Otoplasty is often performed at this age, prior to Elementary School, to decrease teasing about prominent ears.

A common time for treatment of Prominent Ears is age five of six. By this age, the ear is about 85% of its adult size, and if it was going to spontaneously correct, it should have. Otoplasty, or ear changing surgery, is performed as an outpatient procedure under anesthesia with good long-term results. The head is often wrapped for a week, and a head band worn for a few months at night, can help protect the results while the ear shape becomes set. 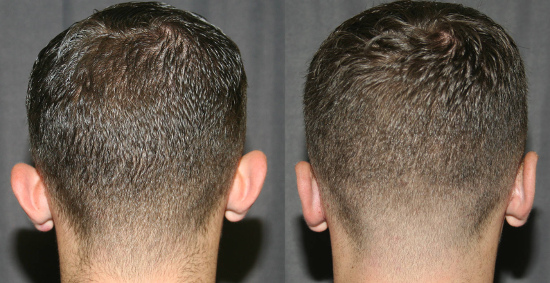 Young Adulthood is another common time for the correction of prominent ears. Otoplasty can improve the appearance of the ears, and remove the anxiety associated with them.

Otoplasty can be performed at any age. A common time for Otoplasty is young adulthood. The ear re-shaping surgery is performed in much the same way as it is in childhood, though it can often be performed under local with light sedation for the properly selected patient. If the idea of being awake causes anxiety, anesthesia may be the better option for you.

Otoplasty can be performed in adults too. Even the follicly challenged can feel confident that the surgical evidence will be hidden behind their ears.

The most common reasons for a prominent ear are:

Each of these deformities can be addressed during Otoplasty. Incomplete folding is corrected with sutures, or by scoring the ear cartilage. A large concha can be surgically reduced, and an anteriorly rotated ear can be set back. Most these corrections are done through an incision hidden in the fold behind the ears, so that it remains hidden, even with short hair-cuts.

If you or your child has prominent ears, a Board Certified Plastic Surgeon can help. A careful examination and medical history will determine the best course of treatment. To schedule a consultation in our San Francisco Bay Area Plastic Surgery Office call (925) 943-6353 today.