I am thrilled to share this exciting news with you today. It has been a year in the making, but the cat is finally out of the bag. My amazing patient and I are featured in the American Society for Aesthetic Plastic Surgery’s new documentary, Beyond the Before and After.

Last February the American Society for Aesthetic Plastic Surgery (ASAPS) announced that they were considering creating a new documentary series of short films featuring patients undergoing aesthetic surgery. While many before and after series have focussed on the reconstructive aspect of plastic surgery, this series is different.

The project is entitled Beyond the Before and After and the goal is to shed light on cosmetic plastic surgery. While cosmetic surgery has gained acceptance, there is still a feeling among many that cosmetic surgery is the frivolous pursuit of the vain. Those of us in the business know that it is much more than this superficial veneer.

The vision for Beyond the Before and After is to explore the motivations, thoughts and emotions of patients having cosmetic surgery, in an honest and open way. The goal is not to focus on the cosmetic outcomes, but to allow anyone looking in from the outside to experience the trepidation and empowerment of cosmetic plastic surgery. The angle of this visionary production is more about what is going on inside the patient rather than what we see from the outside. This is what got me interested, and that’s when I called Colby.

Colby was morbidly obese and not in a good place in life when he decided to change himself for the better. He began weight training and learned how to eat nutritiously. With hard work and dedication he lost over 100 pounds and turned his physical and mental health around. Despite his success, he was “insanely self-conscious” about taking his shirt off, and he wanted to feel comfortable in his skin. He dreamed of breast reduction and abdominal skin tightening and got up the nerve to seek professional assistance. 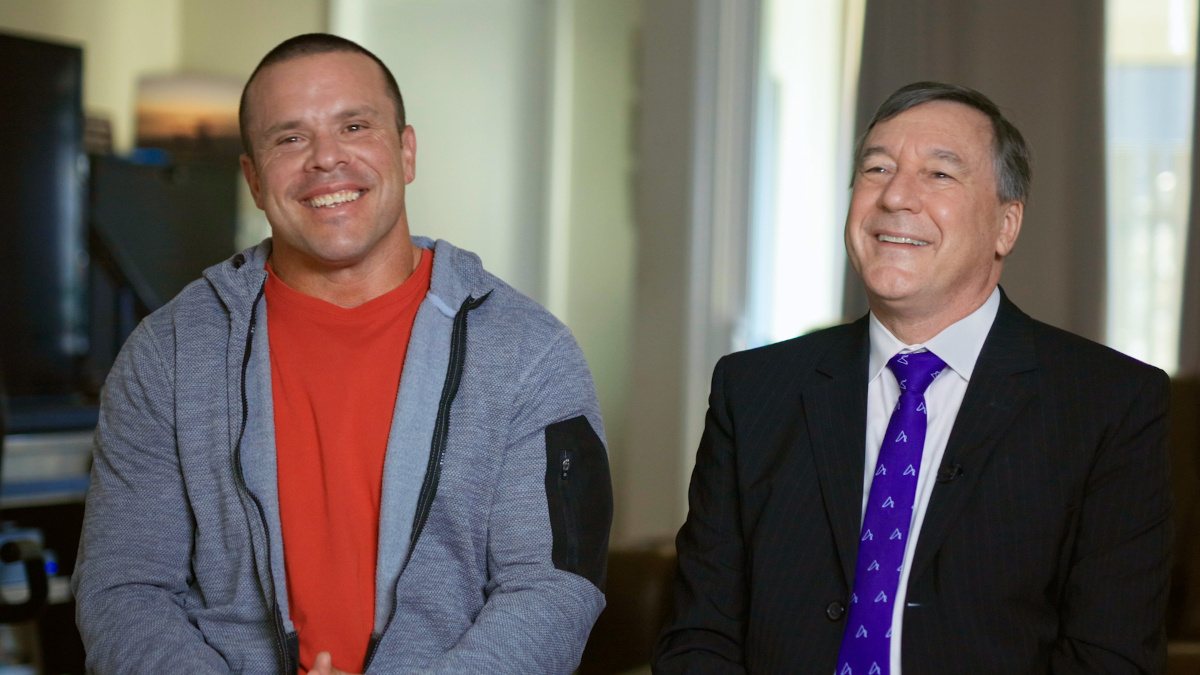 Chilling between takes on location with Colby and Dr. Mele.

Colby came to my office for a consultation for male breast reduction and abdominal wall tightening. At that time, he had lost over 100 pounds and had maximized the benefits of dieting and exercise. While he was very proud of the turnaround he made in this life, the appearance of his chest and abdomen was a constant reminder of being heavy, something he had physically left behind, but still took its mental toll.

Beyond the Before and After

It has been over a year since I first reached out to Colby about being featured in Beyond the Before and After. After several rounds of correspondence, interviews and zoom calls, he was selected. His first reaction was excitement about sharing his story, mixed with a little nervousness that it was really going to happen.

The filming was delayed several times due to COVID-19 restrictions. When the day arrived, negative COVID tests were confirmed, and the cameras rolled. The crew consisted of a single cameraman who set everything up and left before the masks came off. The director and producer remained remote and communicated via FaceTime. Despite the skeleton crew, it worked great, and the show went on.

What follows is a short film that gives some insight into what my determined patient went through to accomplish his goals. A story that he and I are happy to share, and one that we hope that you enjoy and find inspiring. Here is Colby’s story, in his own voice.

Colby’s Beyond the Before and After

I’m a proud member of The Aesthetic Society and am honored to help Colby share his story in this docu-series. You can view more stories in the series by visiting Beyond the Before and After.

What Cosmetic Plastic Surgery Was Performed?

Colby lost substantial weight before coming to see me, and like many weight loss patients, he was concerned with loose skin that remained on his chest and abdominal wall. Colby had a combination of Gynecomastia Reduction and Abdominoplasty (Tummy Tuck). For women this combo would be termed a Mommy Makeover. For men, we could call it a Daddy Do-over.

Daddy Do-over Before and After

Colby lost over 100 pounds and is now in the best shape of his life. The combination of Male Breast Reduction with skin excision and a Tummy Tuck revealed all his hard work.

Where We Are Now

Often, especially with aesthetic plastic surgery, there is the feeling that the procedures are only about enhancing one’s appearance, but in most cases, it is so much deeper than this. I see patient after patient not just looking better, but feeling better. They become mentally stronger, happier and more confident, and go on to achieve more success in their lives. Colby is an excellent example of someone who set a high goal, achieved it, launched past it and who now brings those around him along for the ride.

Like all ASAPS members, Dr. Joseph Mele is a Board Certified Plastic Surgeon.

More information about the procedures offered at our Walnut Creek Plastic Surgery office is available on our websites: