Saturday morning cartoons confirm, when an artists wants to impart strength to the hero, a Strong Chin is part of the package. By their nature, cartoons exaggerate normal features, but here, art imitates nature. Strong chins are often found on the faces of our favorite movie star heroes and heroines. Whether it’s the smooth strength of Brad Pitt or the clefted chiseled look of Henry Cavill, leading men lead with their chins. Wether you like him or not, there is no denying that Mission Impossible Rogue Nation leading man, Tom Cruise, has a strong chin. The same is true of many leading female stars including: Angelina Jolie, Olivia Wilde and Jennifer Aniston. 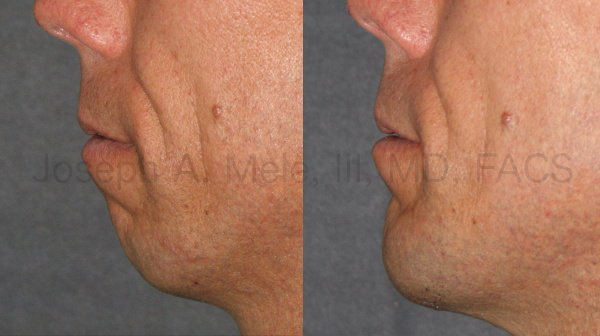 The Chin Augmentation Before and After Pictures above demonstrate the difference a strong jaw makes on the profile view. Chin Implants can provide balance to a disproportionately small jaw.

Chin Augmentation can dramatically change one’s profile and the way people see your facial features. Small Chins are frequently referred to as weak. Smaller chins are normal in children. The upper jaw, the maxilla, usually is formed by age nine. The lower jaw, the mandible, takes twice as long to reach its adult size. So, for most of our childhood, the chin is small. For women, the lower jaw stops growing around age sixteen, while for men, it’s closer to nineteen. Since the lower jaw takes until adulthood to develop fully, we associate the smaller chin with children. 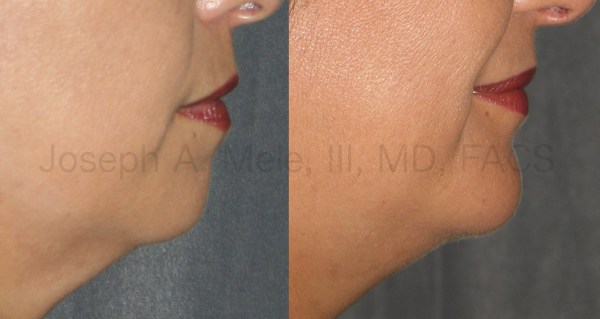 A strong female chin still looks feminine and helps to define the border between the face and neck.

Small Chins are also associated with old faces. As we age, the skin thins, the soft tissue of the chin drops and the bone of the jaw begins to resorb. Chin Augmentation can be an important part of facial rejuvenation. A Chin Implant can replace lost volume, support the drooping soft tissue of the chin and enhance the jaw line. With a Facelift or Necklift, a Chin Augmentation can be a winning combination. Below is an example.

Chin Augmentation and Facelift Before and After Photos

Chin Augmentation can be combined with neck and face lifts to correct a small chin and enhance the jawline.

How to Pick the Best Chin Implant

The single most important aspect of selecting the best Chin Implant size is selecting one that balances your face. No one wants a cartoonish face, and that is the risk of going too large. It’s not the size of the chin, it’s the proportion that is most important. This is why Chin Augmentation is often considered during Rhinoplasty consultations. On profile, the apparent size of the nose is influenced by the projection of the chin. The smaller the chin, the larger the nose appears. Computer imaging has been very helpful in my San Francisco Bay Area Plastic Surgery practice in helping to demonstrate how a Chin Implant can help balance a larger nose.

Chin Implants and Rhinoplasty Before and After Pictures 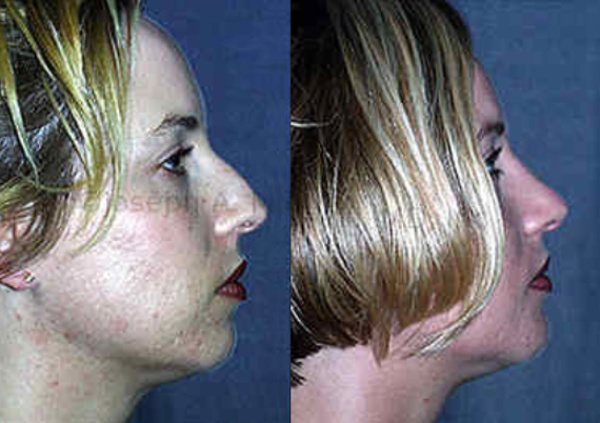 Chin Augmentation can provide proportion to the profile and balance a nose that is too large for the chin.

If you are considering a Chin Implant, select an experienced, Board Certified Plastic Surgeon near you for your Facial Plastic Surgery needs. Computer Imaging has removed some of the guess work and anxiety from Chin Augmentation, by providing a simulation of what is possible. The images help you communicate to me what you are looking for, and help me explain what is possible. Computer images are not a guarantee. Your exact results will depend on the properties of your chin; however, computer imaging can assure us both that we understand the goals and the limitations of the procedure, before proceeding with surgery.

To schedule a private consultation appointment, call (925) 943-6353. There is no substitute for an in-person consultation; however, if you submit a question via the contact form in the margin, I will do my best to answer you.