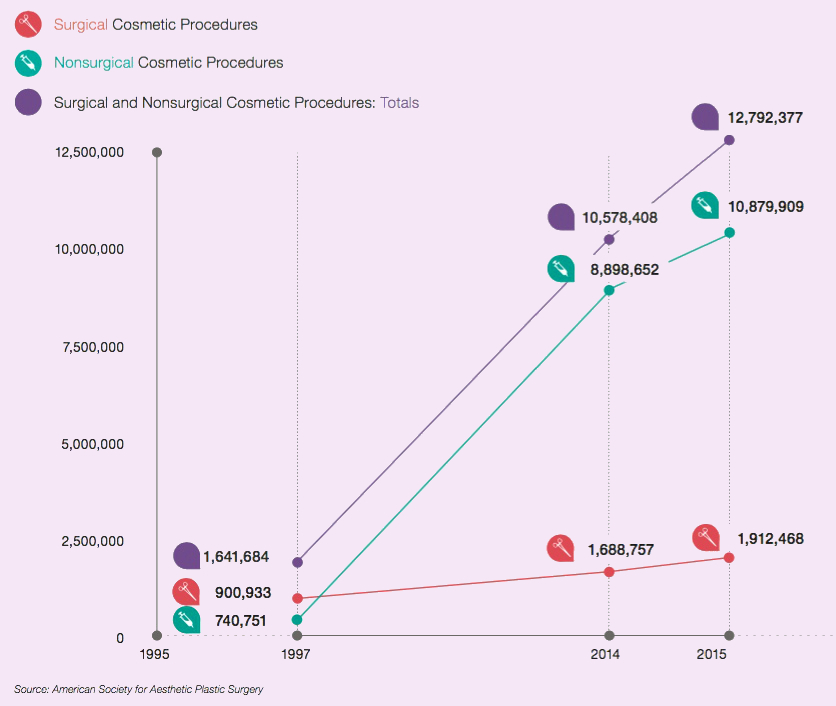 When I started my San Francisco Bay Area Plastic Surgery practice in 1997, cosmetic procedures were performed one eighth as often as they are today.

The nonsurgical procedures of 1997 were not the same as today’s. The sole filler was collagen, which only lasted a few weeks, sometimes months. Botox was available, but the use of Botox for wrinkles was not FDA approved. In 1997, using Botox for frown lines and wrinkles was strictly an off label, use confined to selective Dermatology and Plastic Surgery practices (like mine).

In 2016, there are a variety of FDA approved fillers are available, each lasting months, sometimes years. The most commonly used dermal fillers are Hyaluronic Acid based including: Restylane, Juvederm, Restylane Lift (Perlane), but Radiesse (Calcium Hydroxyapatite spheres) has also emerged for boney augmentation (Cheeks and Chins) and the nasolabial folds. Botox is FDA approved for wrinkles, and is now found in just about every spa in the San Francisco Bay Area. 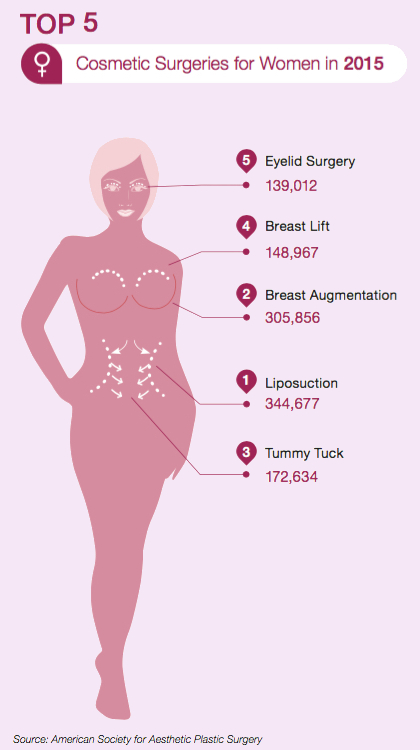 The most popular Cosmetic Plastic Surgery procedures from women have been pretty consistent over the last 18 years:

When the men are added, these five procedures account for 1.2 million of the 1.9 million cosmetic surgeries performed in 2015.

Men account for about 10% of all the cosmetic plastic surgeries performed in the United States. 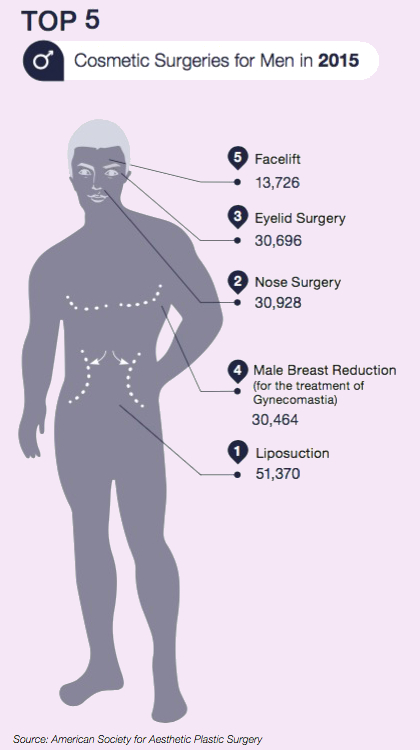 The most popular Cosmetic Plastic Surgery procedures from men are also pretty consistent over the last 18 years, but there has been a proportionately larger increase in Gynecomastia Reduction:

Since men do not get pregnant, procedures like Breast Augmentations, Breast Lifts, Tummy Tucks and other Mommy Makeovers are not as often needed.

Comparing the male and female procedures, Rhinoplasty, Facelifts and Breast Reduction are pushed out of the top five by Mommy Makeovers; however, they are next. Cosmetic nasal surgery was number 6; Facelifts was number 7, and breast reduction was number 8 for women. When it comes to Cosmetic Plastic Surgery, men and women seem to want the same things.

If you are considering Cosmetic Plastic Surgery in the San Francisco Bay Area, call (925) 943-6353 today, and schedule a private consultation appointment. Every consultation is tailored to your specific needs. The decision to proceed, or even to explore, cosmetic surgery is personal. My goal is to provide you the information you need to make your own informed decision.