This Friday marks the 166th anniversary of Elizabeth Blackwell‘s graduation from Geneva Medical College, now Hobart College. Like many people in the US at the time, Elizabeth was born in England. In 1828, at the age of eleven, she moved from Bristol, Gloucestershire, to the Untied States of America, to escape social unrest. 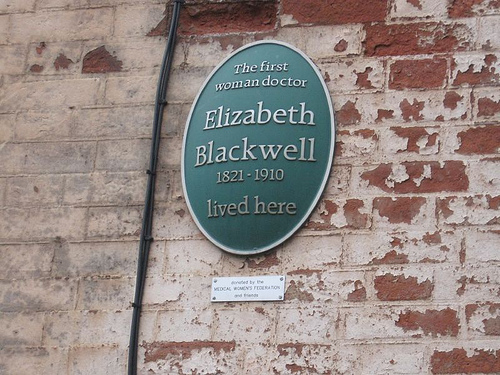 Plaque on the wall of the childhood home of Elizabeth Blackwell in Bristol, n.1 Wilson Street.

Samuel Blackwell, Elizabeth’s father, was a sugar refiner who established the Congress Sugar Refinery in New York City. He was also a Congregationalist who believed each child should be given the opportunity for unlimited development of his/her talents and gifts. A sentiment also embodied in his association with Abolitionist leaders including William Lloyd Garrison and Theodore Weld. In 1838, Samuel Blackwell moved his family to Cincinnati, Ohio. The move was planned to salvage his failing business after his sugar refinery caught fire, but also it was fueled by an interest in cultivating sugar beets, an alternative to the slave-labor-intensive sugar cane. Unfortunately, shortly after the move he died, leaving his widow and nine children in debt. 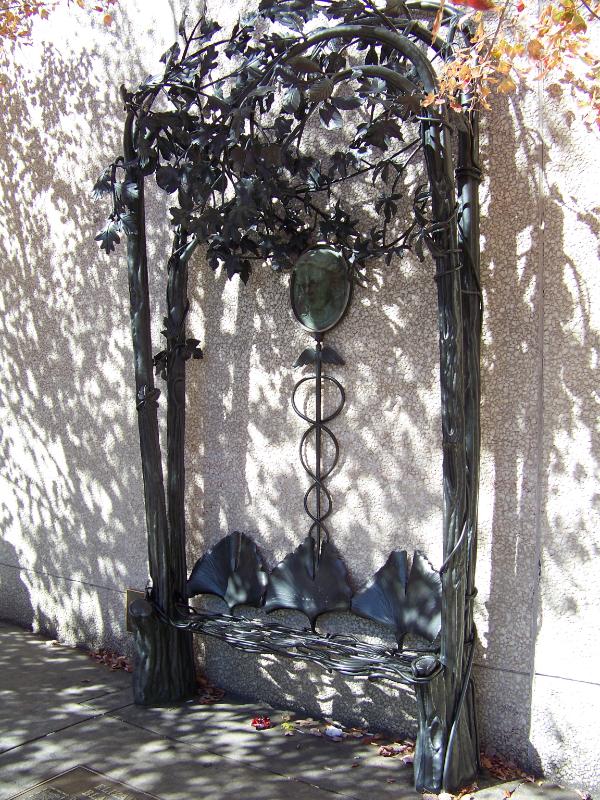 Elizabeth Blackwell commemorative bench located on the side of the Wachovia Bank Building on Patton Avenue in Asheville, NC.

Elizabeth and her older sisters, Anna and Marian, established a boarding school, The Cincinnati English and French Academy for Young Ladies, to make ends meet. Her decision to enter Medicine seems arbitrary. She despised everything to do with bodily functions and medical books; additionally, “female physicians” at the time was the name given to doctors who performed abortions. On the other hand, medicine would provide her with the ability to live an unattached life, independent of a man and the chains of matrimony. The added difficulty of overcoming the patriarchal status-quo, likely helped to keep her on her quest for a medical education.

The sisters once again came through. Anna helped Elizabeth get a job in Asheville, North Carolina, teaching music, with goal of saving $3000 for Medical School. She lodged with Reverend John Dickson who allowed her to use the medical books in his library and introduced her to his physician brother, Samuel Henry Dickson. Her initial attempts at obtaining a medical education where obstructed. Most physicians recommended that she either go to Paris to study, or that she take up a disguise as a man to study medicine.

After much perseverance, Elizabeth Blackwell was accepted by the Geneva Medical College class of 1849, literally. The story, as told by Robert H. Curtis, M.D., in Great Lives: Medicine is as follows:

According to the Elizabeth Blackwell Biography on the National Women’s History Museum website:

As described by Stephen Smith in a letter entitled The Medical Co-education of the Sexes, which was published in the New York Church Union newspaper in 1892:

Not only was Elizabeth Blackwell the first woman to graduate from a U.S. Medical School, she also graduated first in her class. 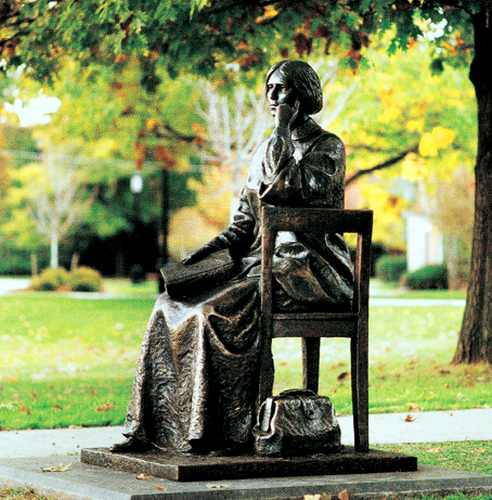 Bronze statue of Elizabeth Blackwell on the Hobart and William Smith College campus. She was admitted in 1847, after been refused by sixteen medical schools.

Elizabeth Blackwell continued her education by taking a midwifery course at La Maternité in Paris. While treating a sick child, she got a serious eye infection which made it necessary to remove her left eye. She was forced to give up her dream to become a surgeon. She never married, but she adopted an Irish orphan named Kitty Barry in 1856 and continued in her quest to help empower women. Great drive can also rub people the wrong way, even those who presumably are on your side. Elizabeth and Florence Nightingale become friends over the year, and discussed opening a hospital together. Their plans, however, fell apart because Florence wanted Elizabeth to train nurses rather than train female physicians. 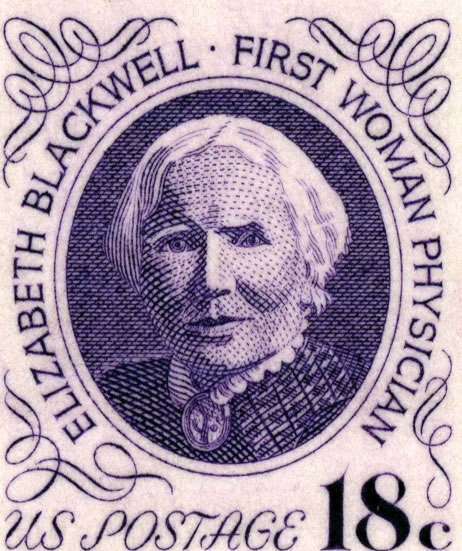 Many monuments to Elizabeth Blackwell’s memory have been erected both in the U.S. and in Europe. A few of them are included above. In 1974, Elizabeth Blackwell was commemorated on a U.S. postage stamp. Her life is an illustration of how personal perseverance can overcome the sometimes enormous obstacles that are a normal part of life. She is widely accepted as one of the most influential figures in Medicine, and would be happy to learn that women made up the majority of my medical school class of 1989, at the University of California, Davis. Not sure if that was a first, but it was nice change from my undergraduate major of Electrical and Computer Engineering at the U.C. Davis College of Engineering.

On May 31, 1910, Elizabeth Blackwell died in her home in Hastings, Sussex. Her ashes are interned at St. Munn’s Parish Church in Kilmun, Scotland, the place where three years earlier a fall down a flight of stairs left her almost completely mentally and physically disabled. 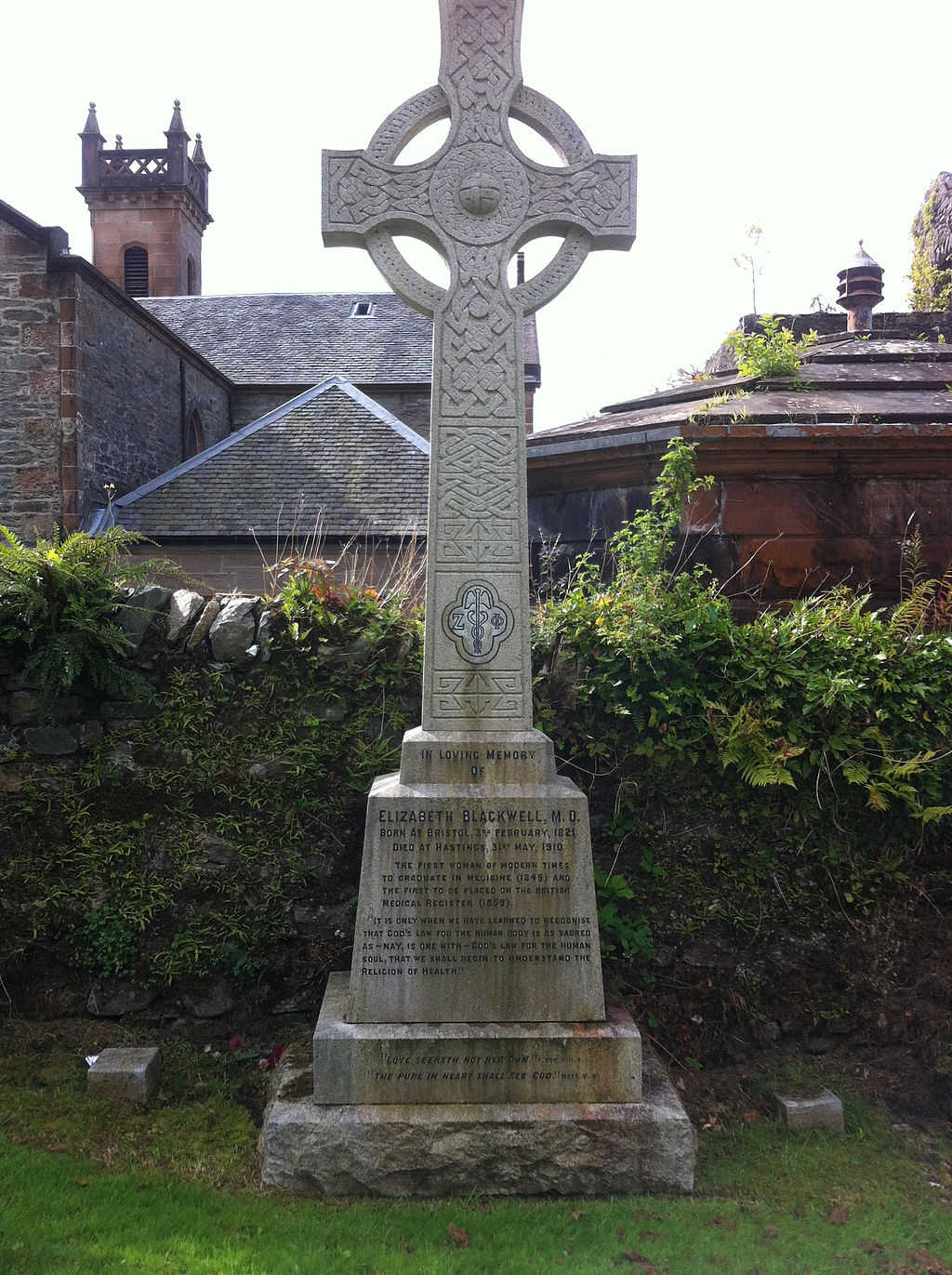 The life story of Elizabeth Blackwell is interesting and well documented. It is a story worth reading for anyone who fights for the ideal that the world should be a fair place. She inspired many women to become physicians, including her younger sister, Emily Blackwell, who became the third woman to graduate from a U.S. Medical School, and the second from Case Western Reserve University.