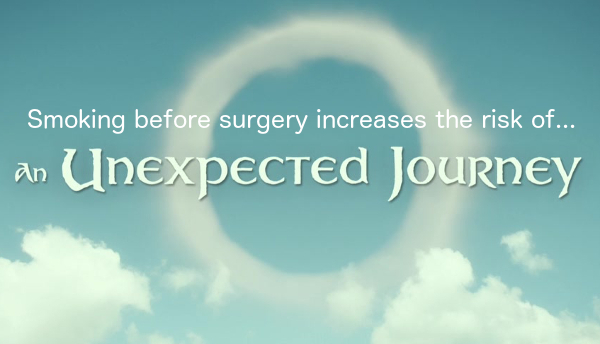 There is ample evidence proving that smoking tobacco cigarettes increases the risk of complications after plastic surgery. Most plastic surgeons recommend that smoking be stopped four weeks before and four weeks after cosmetic surgery to reduce complications and improve healing. If you are a smoker, this may seem excessive, but even four weeks is a compromise. For example, it takes eight weeks for the immunosuppression that accompanies smoking to substantially resolve.

Since patients and doctors alike want the best results with the lowest risk of complications, stopping smoking before plastic surgery is aligned with the patients’ ultimate goal of being better, faster. In fact, even if you are not considering plastic surgery, not smoking significantly improves your health and decreases the outward signs of aging.

Smoking doubles the risks associated with general surgery (operations like hernia repair, appendectomy and gall bladder removal). The glass-half-full way to look at this is that if you smoke, you can cut the risks of surgery in half by stopping smoking four to eight weeks before surgery. 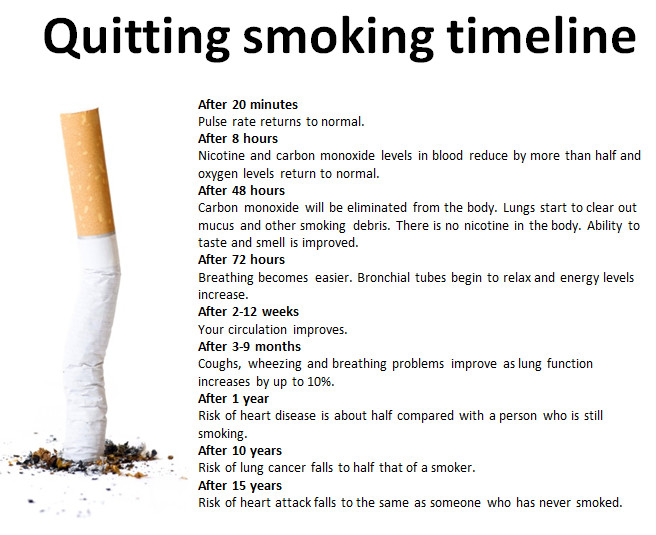 How long does it take for your body to recover from smoking? The above timeline gives just a few examples and includes the average time it takes for the health benefits to be seen.

Face Lifts, Breast Reductions and Tummy Tucks require the formation of skin flaps. Skin flaps are sections of skin that are moved based solely on the blood supply within the skin. These vessels are extremely sensitive to smoking. When smoking, the blood vessels in the skin contract, reducing the blood flow, and the ability of the incision to heal. For these procedures, the risk of wound healing problems is not doubled like in general surgery procedure. It is increased by factor of six. Wound healing problems and skin loss are six times more likely for smokers than for non-smokers.

Is Marijuana Safer Than Tobacco?

No. In many ways, smoking a weed is smoking a weed. Both lead to increased coughing, and for most facial plastic surgery and body work, this causes real problems like bleeding and torn sutures. It is believed that the high from marijuana is directly related to the damage done to the alveoli. Just like smoking, this leads to an increased heart rate to compensate for the decreased oxygen delivery and lower than normal oxygen concentrations in the blood. Since normal oxygen delivery is better for wound healing, smoking makes healing worse. Marijuana may decrease nausea, and so does tobacco, but there are better and safer meds for the nausea associated with anesthesia. Marijuana also has psychological effects not present with tobacco, which can further interfere with the medications given around the time of surgery.

Is Vaping Safer Than Tobacco? 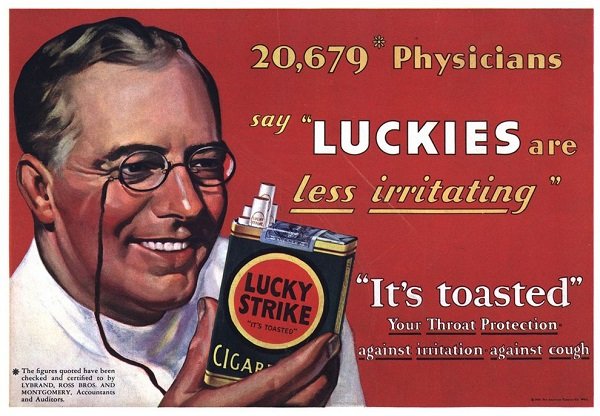 An actual Lucky Strike advertisement, trying to make is seem like doctors recommend them. Granted, less information about the long term effects of smoking was known then. The message of the ad is that their cigarettes are less irritating than other cigarettes; however, they still make you cough, and coughing leads to additional surgical complications. Less terrible seems to be a redundant theme in smoking advertising, begging the question that it is still terrible.

The long-term effects of inhaling nicotine vapor are unclear. It may be less likely to cause cancer and heart disease, but research is still early. Early in smoking’s history, it was touted as the new health craze. It is good to know the history, so that we don’t repeat it.

While there seem to be fewer noxious chemicals with e-cigarettes, questions remain about exactly what all the substances in e-cigarettes are, and what they do. The American Society of Plastic Surgery has recommended to all its members that e-cigarettes be treated the same as cigarettes until they have been proven safe. Definitive research on the effects of vaporized nicotine on the survival of skin and soft tissue flaps is not currently available. Nicotine is vasoactive, and inhaling nicotine vapor may have similar effects on skin circulation as inhaling the nicotine in cigarettes. When it comes to your appearance and your health, why take unnecessary risks?

What Do Most Plastic Surgeons Recommend?

It may seem like I am being hard on smokers, but these are not theoretical risks. I have seen Tummy Tucks go from perfect to purple after half a cigarette. I have replanted fingers successfully, only to have a patient go home, weeks later, smoke and have his finger turn black and fall off. Smoking caused the blood vessels in the skin to contract to the point of not working. These are preventable injuries, and there is no better medicine than prevention.

Most plastic surgeons recommend stopping smoking four weeks before and after any procedure that involves skin flaps. The most common cosmetic skin flap procedures are Face Lifts, Breast Reductions and Tummy Tucks. The risks of wound healing problems is six times higher in smokers when compared to non-smokers having these types of procedures.

When the incision used is only an access point, i.e. no skin flaps, like Breast Augmentation, your risks are only doubled from smoking. Only doubled. Think about that.

While most plastic surgeons will operate on smokers for non-skin-flap type cosmetic procedures, it is still better to stop at least four weeks before surgery. And if you can stop for four weeks, there is no reason to restart. Only 15% of Californians currently smoke cigarettes. This is an all-time low, but with the recent passage of Proposition 64, we will have to see if the decline in smoking will continue.