Blepharoplasty is an Eyelid Lift, and literally means eyelid changing. The nature of the changes can be both cosmetic and reconstructive. Differences in anatomy determine the best methods by which to accomplish our desired goals, and since the anatomy of the upper and lower lids are different, so are the methods used.

The changes usually desired for the upper lids are: removal of excess skin, removal of fat from the inner and central aspect of the upper lids if disproportionate, changing the upper eyelid fold and repositioning the lid margin to open the eye. Other adjustments are sometimes incorporated, and often multiple corrections are performed simultaneously. While these are accurate generalities, every upper eyelid surgery needs to be evaluated individually for safe and predictable results.

Upper Blepharoplasty Before and After Photos

The Upper Blepharoplasty Before and After Photos above demonstrate the changes possible when the excess skin is removed from the upper eyelids. This patient’s stern and tired appearance is replaced with a more relaxed and rested sparkle in the eyes. Patients with excess upper eyelid skin often complain about being asked, “Are you tired?” even when well rested. Excess skin may also block the upper and outer gaze, obstructing vision. Blepharoplasty can help alleviate these unwanted signs and symptoms.

The close-up view of the upper eyelid before and after photos below shows both the excess skin and fat present before Upper Blepharoplasty, and the improvements possible with an Eyelid Lift. 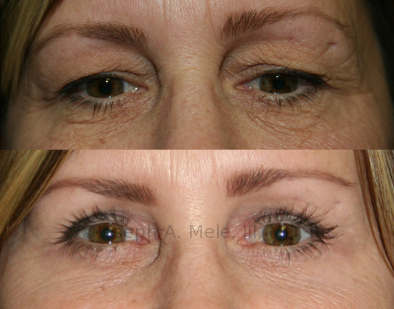 Above, the heaviness and flattening of the upper eyelids is caused in part by excess upper eyelid skin sagging over the lid margin and resting on the eyelashes laterally. Disproportionate fat of the upper eyelid compounds the problem, giving a tired, puffy and disinterested appearance. Once the excess fat and skin are removed, the appearance is more attentive and approachable.

While seen to some extent in all races, the Asian eyelid is the most likely to have an indistinct eyelid crease. Sometimes there is only the hint of a crease, and sometimes there are folds on multiple levels. It is caused by a softer attachment between the eyelid skin and the deeper structures of the lid. This allows the eyelid fat to push lower on the lid. This is normal anatomy, but can lead to increased upper eyelid fullness and an increased risk of recurrence after eyelid surgery. 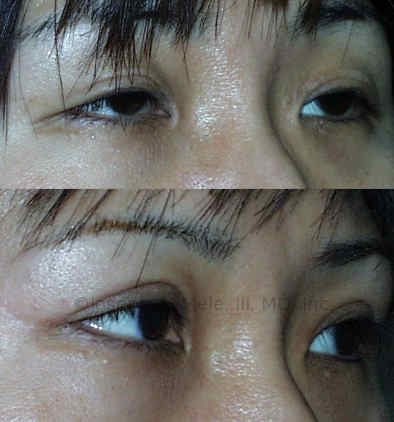 The above Asian Eyelid Before and After Photos reveals the creation of a distinct palpebral fold (eyelid crease), with elevation of the eyelid skin, reduction of eyelid fat and an elevated upper eyelid position. Several fine sutures are used under the skin to create an attachment that allows the skin to fold smoothly. The eyelid margin was also elevated to open the eyes.

Changing the upper eyelid fold and position is aesthetic in the case above, but is reconstructive in cases where vision is obstructed. In the next case, the eyelids are so saggy that they block the pupils. 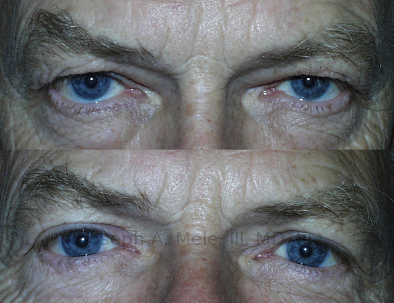 Before upper blepharoplasty and levator advancement (muscle tightening), ptosis (sagging) of the upper eyelids is blocking the patient’s vision. He underwent reconstructive plastic surgery to tighten the muscles that elevate the eyelid and raise the upper eyelid’s edge above the pupils.

In the above case, excess skin and fat were removed, and the muscles that raise the eyelids were tightened. The result is obvious when looking at the pupils. Before surgery, the upper eyelid is partially covering the pupils. After Upper Blepharoplasty, a few millimeters of iris are now visible above the pupils. This means light can get into the eye without obstruction, and vision is improved. Lower eyelid surgery was also performed to improve the eyelid position and remove the bags. For about Lower Eyelid Surgery read my next post: Lower Eyelids – Blepharoplasty SF Bay Area.

Hopefully, the narrative and photos above help illustrate some of benefits of Upper Eyelid Surgery. To learn what blepharoplasty can do for you call (925) 943-6353 to schedule a private consultation. While the Internet is a great source of general information, there is no substitute for the skill and experience of a Board Certified Plastic Surgeon.