The number three cosmetic plastic surgery procedure, Liposuction, has generated a lot of questions. The countdown will continue next week, but I wanted to insert a post to answer your questions — the most common being, “What’s the difference between regular liposuction and brand name liposuction.” I am always looking for the best way to do my job. I recently considered buying a Smart-Lipo machine, and here is what I found…

Tumescent Liposuction Before and After Pictures 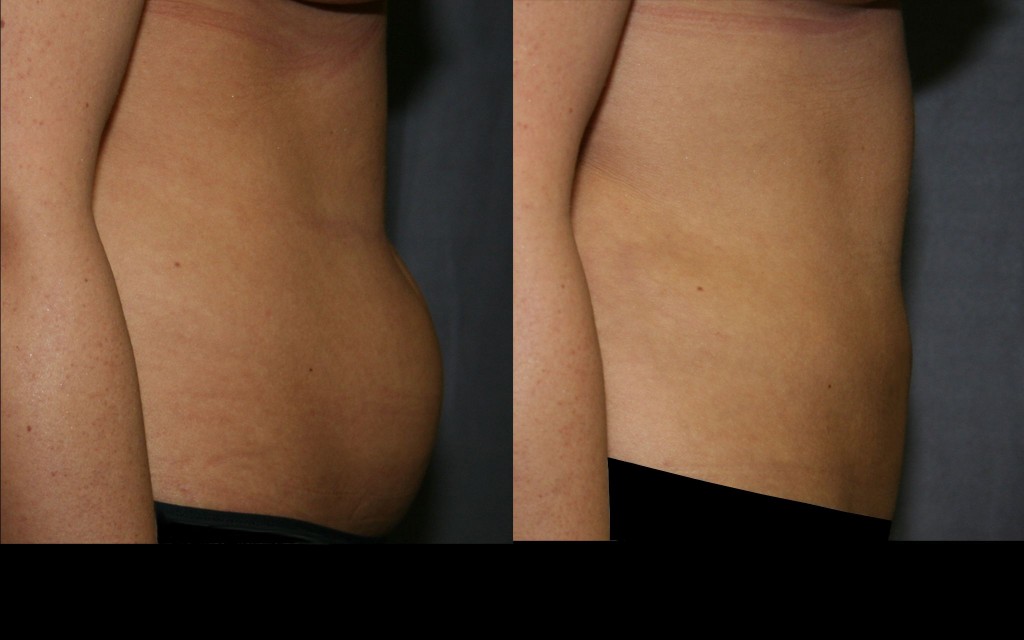 Tumescent Liposuction of the Abdomen - With good skin tone, fat can be removed and the skin remains smooth. This is Dumb-Lipo not Smart-Lipo, no laser, no ultrasound, just reliable tumescent liposuction.

Brand name liposuction is viewed more as a marketing ploy than as a giant leap in the advancement of liposuction. Smart-Lipo is the cleverly named poster child for this. Smart-Lipo makes dramatic claims about its skin shrinking ability, but as you can see from above, good skin doesn’t need a laser to shrink. The claims are based on a “study” of 10 patients who had side by side tumescent liposuction and Smart-Lipo. More on this below.

Liposuction is Designed to Remove Fat

When the skin is tight, removing fat leads to improved proportions and a nice smooth result. The key feature of Liposuction is its ability to remove fat and leave the skin uninjured. Incisions are required, but these are small, and can be placed out of the way. Elastic skin will shrink to the smaller dimensions after the fat is removed, but the amount of shrinkage varies widely. When there is a frank excess of skin, skin tightening is required. Since we don’t yet have a reliable skin shrinking ray, the excess skin needs to be surgically removed. Tummy Tucks, Body Lifts, Facelifts and Eyelid Lifts all tighten skin by surgically removing the excess.

The most important thing for you as a consumer to know is that liposuction plus loose skin usually equals bad results. Skin that is already folding, in most cases, will fold more after the fat supporting it is removed. It’s like removing stuffing from an already under stuffed pillow. The skin collapses, and becomes irregular in contour. There are exceptions to this rule, and I have had patients who have had dramatic skin tightening after tumescent liposuction, but this is the exception rather than the rule.

The holy grail of plastic surgery would be a skin shrinking ray. If we could shrink wrap skin by shining a light on it, we could perform facelifts, breast lifts and tummy tucks without a scar. So whenever a device claims to shrink skin, I need to know more. Smart-Lipo is one such device.

Smart-Lipo claims to shrink skin 25% more than liposuction. Now liposuction is not good at shrinking skin, so 25% more shrinkage is not very impressive, but the claim is still worth investigating. The article was published in the Aesthetic Surgery Journal and is a side by side comparison in 10 patients undergoing abdominal liposuction. For purposes of full disclosure, the study was funded by Smart-Lipo, and the author of the publication is a paid spokesperson for the Smart-Lipo machine.

While going from 13% to 16% average shrinkage looks like a 23% improvement in shrinkage, this is not a scientifically significant result. Due to the large range of outcomes (2 to 23% and 7 to 23%) and small sample size (9 patients), the difference is NOT statistically significant (using a Students t-Test with Summary Data). The p value is 0.321, which means there is a 32.1% chance that the results are due to random luck. In order for data to be deemed “significant”, the p value should be less than 0.05, and stricter studies would demand p values of less than 0.01. The smaller the number the less likely the results are random chance. Translation to English: p=0.01 means there is only a 1% chance that the results are due to luck, or conversely, a 99% chance that what is stated is in fact true.

It’s like to tossing a coin twice, and getting heads twice. If this was your only experience with flipping coins, you might assume that the coin will always give heads. However, unless you have a two headed coin, we know guessing heads will be wrong half the time. The problem here, like in the Smart-Lipo study, is the sample size. With a sample size of two, there is a 25% chance of getting heads twice in a row. (probability due to chance = 25% or p=0.25). It’s important to note that a p value of 0.25 is better than the 0.312 in the study.

Sticking with the coin analogy for little longer, for 10 flips, the chances of getting heads 10 times in a row is 1 in 1024 or less than 0.1% (p=.001). So, if you flip a coin ten times, and get heads ten times, it’s either a rare occurrence, or you do have a two headed coin. Random chance is diluted by repetition. This is why we want studies with 100’s or 1000’s of subjects.

Not so Clear Cut

Unfortunately, comparing tumescent and laser liposuction does not give heads or tails results. There is a lot of overlap in the outcomes, so a proper study will require more than 10 patients. Because the benefit of laser liposuction, if any, is small, closer to 100 patients are required. The 9 included in the Smart-Lipo study are not enough.

Marketing Lasers is Cool and Science is So Boring

The science is boring. It takes a lot of time and effort to gather and understand the results. It is much easier to jump to the succinct conclusion of the manufacturer funded study and turn off the thinking cap. Unfortunately, this type of “evidence” is becoming more and more common, even in respected peer reviewed journals. I am all for publishing the data. In this a case a disclaimer regarding the funding of the study and the relationship of the author to the company were provided. In this case, a framing editorial would certainly have helped frame the weight of the evidence. Simply put, deriving significant values from insignificant data is not possible.

I am happy to see some independent efforts underway by neutral professionals to evaluate the claims. I suspect there is a kernel of truth in Smart-Lipo’s claim, but I also suspect that the shrinkage will not be enough to improve patient satisfaction. I want a difference significant enough that I can see it with my naked eye. Because if I can’t see it, you won’t be able to see it either. We still have not found the Holy Grail.

What if it Was True?

So, what if we repeat the study with 1000 patients? Will we find the above data valid? Even if it is true, the amount of shrinkage varies so widely that individual results cannot be guaranteed. The study only followed people for 3 months. What happens at 6 months or a year? From other studies we know that the effects of laser treatments fade with time. When does the small improvement disappear? It takes a year for the body to fully heal from injury, so a minimum of one year’s follow-up is required.

This fact has been demonstrated in other studies comparing laser liposuction on one half of the body to tumescent liposuction on the other half of the body. Patients, doctors and independent reviewers could not tell which side was which. This type of research seems a lot more important than if a tattoo on the skin shrinks, or if the skin resists a suction cup better.

Thankfully, larger independent trials are currently organizing. These will take time, so I will reserve my final judgement until then. At this point in time, I’m sticking with Dumb-Lipo. It’s safe and effective, and I can’t burn anyone with it.

No matter what plastic surgery procedure you are considering, the tool is not as important as the person holding it. I don’t tell my plumber, Aaron, what brand of wrench to use. I just want him to fix my pipes. I know he will do the job right, even if all he has is pliers, because I trust him, and I know he’s not going to stop until the the job is done correctly. I explain the problem; Aaron provides the solution. He uses the right wrench; I get my sink fixed. It’s a good deal. You should feel the same way about your plastic surgeon. Good plastic surgery is a partnership based on trust.