Breast Implants Have Come a Long Way in 50 Years

You might be surprised to find out that saline filled implants did not appear until the French company, Laboratoires Arion, began manufacturing them in 1964. Filled with 0.9% saline, water that is the same saltiness as your body, these implants are filled in the operating room after insertion, allowing for a smaller incision compared to the incision needed for pre-filled silicone gel breast implants. While early models were fragile, contemporary saline breast implants have a stronger silicone elastomer shell. These implants became the most frequently used in the US during the 1990’s, when silicone gel filled breast implants where restricted to reconstructive use only.

The first generation was tear-dropped shaped. Yes, that’s correct, the first breast implants were silicone filled and tear dropped shaped. These implants have a smooth surface, so to keep them from rotating, a Dacron patch was attached to the back. It had the texture of the soft side of Velco, and allowed the body a point of attachment to prevent rotation. The shell was thick, as was the gel inside. This helped prevent deflation and tearing at the point of fixation. The thicker gel also made it easier to take care of any leaks, as the thicker the gel, the less it migrates.

In the 1970’s, in an attempt to improve the look and feel after breast augmentation, the shell and the gel inside the implant was made thinner. Unfortunately, new technology doesn’t always mean improved. With these changes came more complications. The thinner shells broke more frequently and the thinner gel could migrate farther after a leak. Even without a leak, silicone gel could “bleed” through the intact shell like Helium through a balloon. This resulted in a class action lawsuit against Dow Corning and other breast implant manufacturers. Other “improvements” which arrived in the 70’s were polyurethane foam coating for the implant shell and double lumen implants.

Polyurethane foam coating reduced the incidence of capsular contracture, but a concern that a breakdown product of the coating (TDA) might cause cancer stopped sales. The FDA later stated the risk was infinitesimally small, but no breast implant manufacturer has sought FDA approval for sale in the US. These implants remain available in Europe and South America.

Around 1985, breast implants where manufactured with elastomer coated shells. This significantly reduced the number of implant failures and also the problem with gel “bleed”. Since that time the rate of capsular contracture has dropped. Coincidence? Maybe. At the same time the changes in the shell were made, additional improvements in manufacturing and quality control also occurred.

The next incarnation of silicone breast implants are the gummi-bears. They are filled with a soft, semi-solid silicone with the consistency of gummi-bear candy. They are soft enough to give when compressed, but firm enough to return to their original shape when the pressure is released. Since they are essentially a solid, these implants do not experience problems with leakage or gel migration. Most are made with an anatomical shape. To prevent rotation, the implants surface is textured to allow the capsule to attach to the shell. This works most the time, but implant malposition from rotation can be a problem (not seen with smooth round implants). Overall, the form-stable implants are more firm, but still soft. Somewhat surprisingly, they can still ripple (wrinkle). 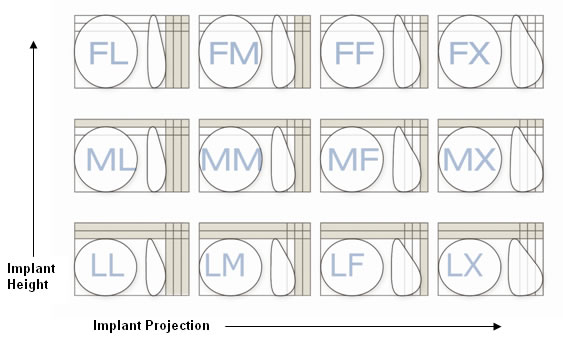 Since they are solid, gummi-bear breast implants require a larger incision for placement. This can be a deterrent when a simple breast augmentation is being considered. The mastectomy incision used for breast reconstruction and the breast lift incisions allow for the insertion of solid implants without additional incision length.

Soft-solid breast implants are figuratively sitting on the shelf at the FDA. Despite some advantages, the approval process has ground to halt over the last several years. The FDA has all the information it has requested, and no new requests for information are forthcoming. Despite this, no vote has been taken. It is increasingly unclear to industry, plastic surgeons and patients alike what the reason is. These fifth generation breast implants have a good record in Europe, where they have been used since 1995, and they have been available since 2000 to our northern neighbor, Canada. Dear FDA, how about approving silicone implants that can’t leak this year?