Cosmetic Ear Surgery is termed Otoplasty. The word literally means ear modifying, and it includes a variety of procedures and techniques for creating or reshaping the normal anatomy of ears.

Ear Pinning Before And After Pictures 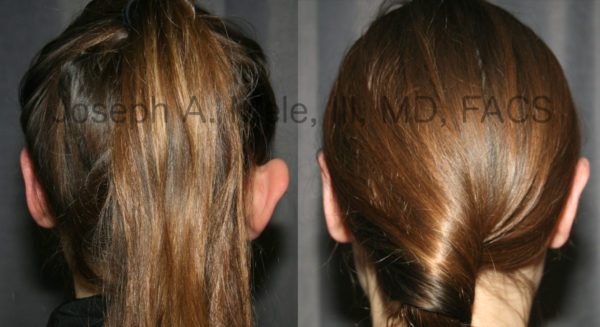 Otoplasty Before and After Pictures – The patient above was concerned with the asymmetry of her right ear. Before otoplasty, it stuck out much farther than the left ear. After ear pinning, the ears’ symmetry is markedly improved.

The most common type of Otoplasty is Ear Pinning for the correction of prominent ears. Usually, both ears are prominent, but sometimes, as with the patient above, only one side is affected. Otoplasty reshaped her right ear, creating the normal anatomy that allows the ear to fold against the head. The result is ears that are a better match and a happy patient.

Today’s Otoplasty Video discusses several cases of cosmetic ear surgery and illustrates the narrative with multiple Ear Pinning Before and After Pictures. The video first appeared on the San Francisco Bay Area’s news station, KRON 4’s Body Beautiful. The cases presented are of patients who had Otoplasty by Dr. Mele, but it is important to remember that individual results vary.

The Correction Of Prominent Ears

Prominent Ears are usually bilateral. The patient above did not like how his ears stuck out. Otoplasty was used to reduce their appearance. The incisions are placed in the fold behind the ear and are usually difficult to see.

Otoplasty is a simple and satisfying outpatient procedure for the correction of prominent ears. Ears that stick out can make people uncomfortable and self conscious. For young children, it can be a source of teasing. Prominent ears may limit hairstyle options as many patients try to disguise their ears with long hair or hats. For those with short hair, there is no hiding prominent ears and it is a common reason for seeking ear pinning surgery.

To learn more about Otoplasty, call (925) 943-6353 and schedule a private consultation appointment. Your options will be discussed in detail so that you can decide if Otoplasty is right for you.