Thank you for your service. I try to say these words as often as possible. We owe everything to our veterans. This was made crystal clear during a recent visit to the National World War II Museum in New Orleans, LA.

I was in New Orleans last weekend for the American Society for Aesthetic Plastic Surgery‘s annual Aesthetic Meeting. It is my favorite plastic surgery meeting. Each year board certified plastic surgeons like me, who specialize in Cosmetic Plastic Surgery, get together to share their knowledge and see what’s new in Plastic Surgery. The majority of the time is spent sitting in lectures and taking courses, but I also like to get a taste of the local culture. On my list for New Orleans was the National World War II Museum. 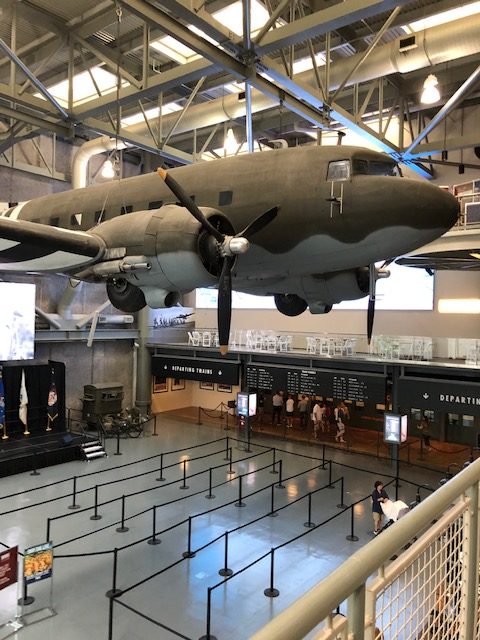 The entrance to the National World War II Museum complete with C-47 and the L.W. “Pete” Kent Train Car Experience.

The National World War II Museum is the most popular attraction in town, and in New Orleans there is lots of competition. The museum sits on five acres and is currently divided into five buildings. Above is the entry where you can buy tickets and see a Higgins boat. More than 20,000 boats were designed and built by Higgins Industries in New Orleans and used in all major amphibious landings of the war. You can also see Sherman and Stuart tanks, jeeps, a halftrack and a restored C-47 aircraft that dropped paratroopers over the fields of Normandy and saw action in the Battle of the Bulge.

The museum entrance is in the Louisiana Memorial Pavilion, pictured above. On the far wall is a train station. This is the entrance to the museum and you get a small taste of what it was like enlisting. You are given a “dog tag” card, which you initialize on the train and use throughout the museum to view extra content and collect artifacts. This building houses exhibits on D-day, the home front and is a great place to start.

The next stop was the Solomon Victory Theater. It houses the theater for Beyond All Boundaries, a 4-D experience produced and narrated by Tom Hanks. I sat next to a veteran in camo-fatigues. The movie includes special lighting, sound and smoke effects to create the sights and sounds of battle. I could see he was shaken by the simulation, as he clasped his wife’s hand and wiped the tears from his eyes. I thought of my Uncle, a combat veteran of three tours, who passed away this year. The war affected him his entire life. If he was napping, and you had to call him for dinner, you best do it from a distance. Sometimes he’d wake ready to fight. I don’t think my uncle would have enjoyed the movie, and I was prepared to clear a hole for the veteran next to me if he had the same survival instinct. Fortunately, the man in uniform made it through the movie. I thanked him for his service, knowing that his sacrifice was part of the reason I could sit through the “4-D” presentation informed about, but without experiencing the true fear of war. 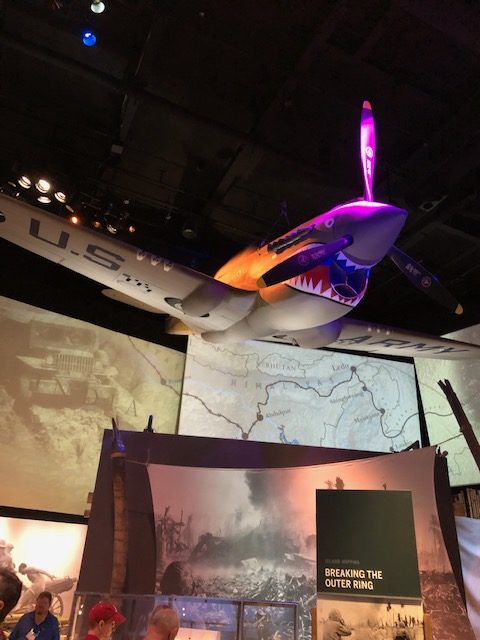 A shark-faced P-40 Warhawk hangs in the “Road to Tokyo” exhibit at the National World War II Museum in New Orleans, LA. These fighters were flown by the legendary “Flying Tigers.”

The Campaigns of Courage Building houses exhibits on the European and Pacific Theaters. It is divided into two sections. The Road to Tokyo tells the story from Pearl Harbor to Tokyo Bay. The Road to Berlin focuses on the American campaigns throughout Europe.

Throughout my life, the US has always been a world power and has had the strongest military on the planet. It was interesting to learn that prior to World War II, the US Military was ranked 19th in the world, behind Portugal and Romania. In 1939, the US armed forces numbered 180,000, and our military hardware was also less than cutting edge. As the war progressed, what we lacked in equipment quality, we made up for in speed of production. By the end of the war, over 16 million (roughly 11% of the US population) fought in World War II.

The John E. Kushner Restoration Pavilion features glass exterior walls that allow you to look behind-the-scenes and view of the restoration and preservation of the museums WWII artifacts. It also has a section on how Science Technology Engineering and Math (STEM) where used to solve problems during the war. 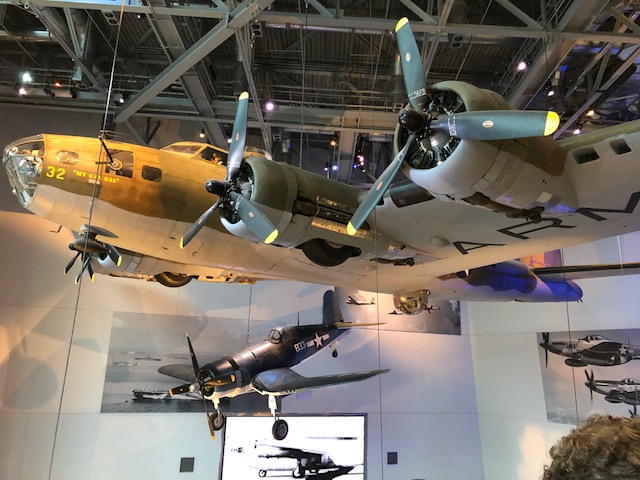 The U.S. Freedom Pavilion – The Boeing Center houses resorted aircraft, tanks, the Final Mission Experience and the Laborde Services Gallery. The Final Mission: USS Tang Submarine Experience lets you go along with the crew of the USS Tang on their final mission. You receive the name and assignment of a crew member and operate their station during the simulation. At the end you get a taste of warfare. As the Tang in sinks and the lights do out, you learn if you perished, or if you were one of the very few “lucky” survivors taken into Japanese captivity.

In elementary school, I wrote a report on the USS Tang. Some might not find this politically correct in the Bay Area these days, but the USS Tang’s story should not be forgotten.

The USS Tang was built here, in the San Francisco Bay Area, at the Mare Island Naval Shipyard. She first set sail on December 15, 1941. Crew training was completed in San Diego, and from there she sailed to Pearl Harbor, HI. She only survived five patrols; however, the USS Tang is credited with sinking 33 ships totaling 116,454 tons. This places her number one in both the number of ships sank and tonnage sank during World War II by an American submarine.

You can’t miss the warbirds flying inside the Freedom Pavilion. They include the B-25 Mitchell, B-24 Liberator, B-17 Flying Fortress, SBD Dauntless, TBM Avenger, F4U Corsair and last but not least, the P-51 Mustang. Sadly, my personal favorite, the P-38, was not present. 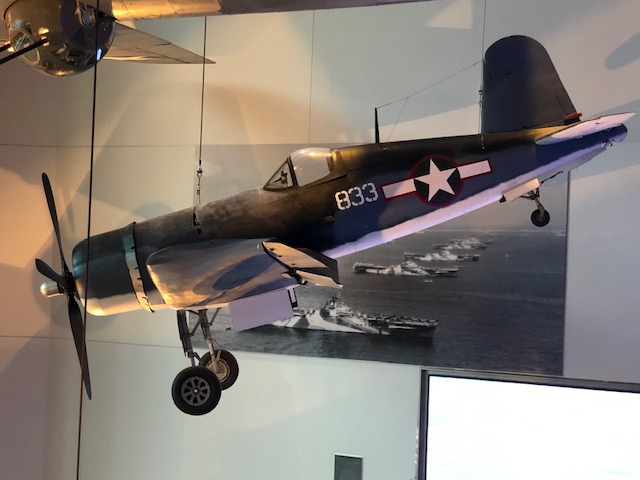 The F4U Corsair reminds me of the 1970 TV show Baa Baa Black Sheep. The opening credits read: “In World War II, Marine Corps Major Greg ‘Pappy’ Boyington commanded a squadron of fighter pilots. They were a collection of misfits and screwballs who became the terrors of the South Pacific. They were known as the Black Sheep.” Like most TV shows, is was fiction; however, it was loosely based on real squadron commander: Pappy Boyington.

Major Gregory “Pappy” Boyington was born December 4, 1912, in Coeur d’Alene, Idaho, where the airport bears his name. His military service included being a Marine Corps aviator with the Pacific fleet, a legendary “Flying Tiger” (1st American Volunteer Group) in the Republic of China Air Force in Burma and commander of Marine fighter Black Sheep squadron (VMF-214). He was shot down and held prisoner by the Japanese for more than 18 months. After the war he was released and moved to California. He died January 11, 1988, at the age of 75, in Fresno. I was fortunate to meet his grand-daughter, a friend of a friend, who retains the family spirit. After all, this is the reason wars are fought. 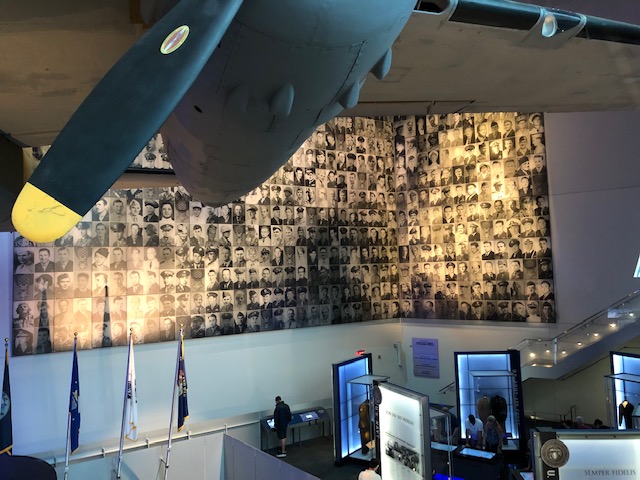 The faces of many of the Medal of Honor recipients are displayed in the US Freedom Pavilion at the National World War II Museum in New Orleans, LA.

Currently, there are over 23 million living veterans in the US, and 17 million of them are war veterans. These are people who put their lives on hold to serve their country and protect our freedom. About 10% bear the physical wounds of their service, and many more have wounds which are less apparent, but just as real. If you have any doubt about what service means, I encourage to visit the National World War II Museum in New Orleans. Every veteran has made a significant contribution, so I say to all veterans, “Thank you for your service.”