Liposuction was the most popular Cosmetic Plastic Surgery of 2021, with almost half a million procedures performed by Board Certified Plastic Surgeons.

Men get Liposuction, too. In the above case, the love handles were targeted. The muffin top that occupied the area above the bathing suit is now just a memory that provides fitness motivation.

First, Liposuction works, and it has been around for a long time. It is a safe and effective method of removing undesirable fat with the smallest possible incisions. As a result, it continues to be one of the most frequently performed cosmetic procedures and a big target for disruptive technology. It’s hard to argue with a tried and true method, but it’s harder to market a technique which is not new.

Second, we like new stuff. The pressure for new and better methods to eliminate fat remains; however the basics of Liposuction have been pretty well optimized and unchanged the last 30 years. Every recent “new” technique is a small variation of the tumescent technique with minimal improvement on outcomes if any. Whether it’s a blogger looking to report something new; a multimillion dollar corporation trying to sell a new machine; or practitioners trying to differentiate themselves, there are many motivations to develop a new marketing term, even if it’s an old gem like lipo. 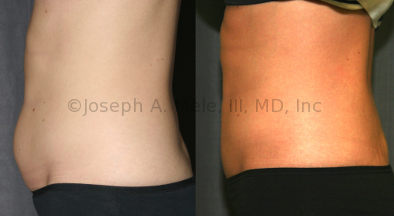 Lipo 360 is the latest Liposuction marketing term, but it simply means liposuction performed all the way around the body. In this case the abdomen, flanks and back were targeted.

The latest marketing term for Liposuction is Lipo 360. It is not a new technique; in fact it’s not even new. It just means Liposuction that goes 360 degrees around the trunk or the thighs. It has become associated with other procedures such as Tummy Tucks and Brazilian Butt Lifts, but it is a means to an end. Simply put, if you have disproportionate fat on the lower abdomen that wraps around the flanks and lower back, you may be a candidate for Liposuction all the way around or Lipo 360. This is a good way to remove disproportionate fat of the abdomen while also reducing the love handles or a muffin top.

There is nothing intrinsically “smart” about SmartLipo. The SmartLipo machine is a laser, and it does nothing without the addition of Tumescent Liposuction. Most board certified plastic surgeons continue to employ “Dumb Lipo” because it is safer and does not require a $200k laser. SmartLipo was an attempt to piggyback on the success of Tumescent Liposuction and further tighten the skin by heating up the back of the skin. In reality, when it works it barely shrinks the skin and when it doesn’t, it can cause disfiguring burns.

Another Liposuction euphemism is Liposculpture. Like Lipo 360, it is just Liposuction, but with an emphasis and leaving the best contours by not removing fat from areas that still need fullness. A simple example is the hips. If you are a man or a woman looking for an athletic shape, fat is removed from the hips. However, if you want to maintain an hourglass-shaped figure, fat is sculpted preferentially from the waist and left to pad the hips. This is something every good board certified plastic surgeon does, but Liposuculpture sounds better than Liposuction. Who wouldn’t rather sculpt than suck? 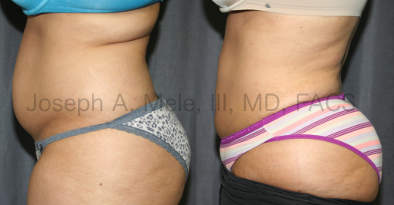 Liposuction can create more feminine or masculine contours. In this case, my patient liked her curves, and was looking to smooth out her contour without masculinizing her hips.

When it comes to Liposuction you want to consult with an experienced plastic surgeon. For Liposuction Consultations in the greater San Francisco Bay Area, call (925) 943-6353 to schedule your appointment.

Liposuction is art combined with science. Choose a Board Certified Plastic Surgeon with an eye for aesthetics and the experience to back it up. It is the technician, not the technique that determines your outcome.