Many of my San Francisco Plastic Surgery Blog posts are inspired by the questions I get from patients. Inquires come from patients in my Walnut Creek Plastic Surgery Office during in-person consultations and also from the Internet, via the contact forms available in the margin of this blog and my other Plastic Surgery Web Sites. The question of fat grafting for Breast Augmentation comes up with some regularity, so I will share both the pros and cons of fat grafting, specifically, How Fat Grafting Compares to Breast Implants for Breast Augmentation.

The Medical Use of Fat 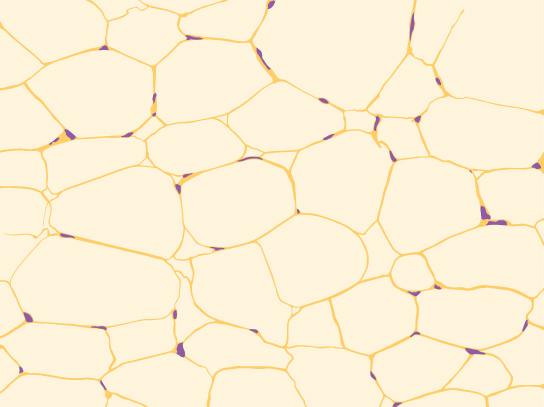 Fat cells are incredibly efficient at storing fat. While most cells look like a fried egg with a nucleus the size and proportion of the yolk, fat cells are so full of fat that the nucleus looks more like the gondola of a blimp. In the picture, the nuclei are the small purple dots along the edges of the giant fat-filled adipocytes.

Fat and medicine have long been associated. Anthropologists have discovered that Australian Aborigines used fat, bandaged with animal skins or bark, to treat open wounds. The Aboriginal folklore is some of the oldest and most accurate oral history on the planet. Their stories date back 300 generations, and include not only medical care, but the rise in sea level 10,000 years ago as the ice age ended, the great barrier reef forming the coastline of Australia and fertile hunting grounds where today’s Australian bays exist.

European medical history also documents the use of fat for treating opens wounds. While this was usually animal fat, human fat was also used. Descriptions of the Siege of Ostend, circa 1601, include stories of Dutch surgeons bringing “great bags of human fat” to the battlefield to treat the wounded. Since Liposuction had not yet been invented, I will leave to your imagination the source.

The Surgical Use of Fat 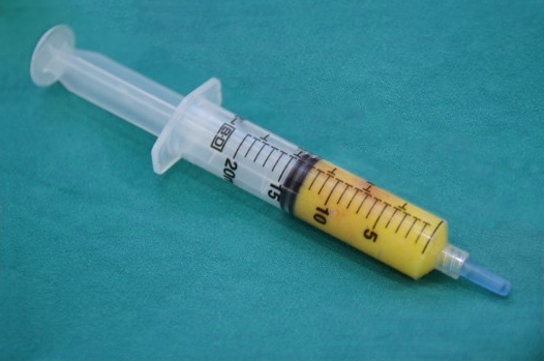 Fat is harvested with liposuction, and the cells are processed to remove oils, fluid and broken cells from the healthy fat cells (adipocytes) for grafting.

As early as 1889, Fat Transfer procedures are documented. In an attempt to cure a patient suffering from cirrhosis of the liver, Van der Meulen transplanted the patient’s omentum, a collection of fat and blood vessels found in our abdomen, to the patient’s liver, in an attempt to revascularize the failing organ. The omentum was disconnected from its blood supply, and additional fat autograft was placed with the omentum between the liver and the diaphragm. While this first attempt resulted in the patient’s death, in 1895, Rutherford Morison tried again with a similar operation.

Morison’s patient also had advanced cirrhosis. After the procedure, this patient lived for two years. He may have lived longer; however, he died two days after a much more trivial operation for a ventral hernia repair. Even with today, cirrhotic patients do not do well with surgery. They have trouble with nutrition, clotting and controlling infections. Remarkably, the post mortem autopsy revealed that the omentum and Fat Transfer resulted in the formation of numerous new blood vessels, which helped to decompress the dangerous portal hypertension seen in cirrhosis. Portal decompression in more reliable forms is still used to treat portal hypertension caused by cirrhosis.

Fat Grafting is an old technique. In 1893, Gustav Adolf Neuber reported the use of small fat grafts to fill in a soft tissue depression on a 20-year-old man’s face. Neuber mentioned he had less success when he tried to use larger grafts, saying that “grafts larger than an almond would not give good results”. This is still true today, as larger fat grafts cannot establish a blood supply fast enough to survive the transplantation.

Fat Grafting in the Breast

There are many examples for fat transfer in the medical literature beginning early in the 1900’s. In 1895, Vincenz Czerny performed Breast Enhancement with the transplantation of a lumbar lipoma removed from a woman’s back and placed into her breast. Early pioneers like, Holander, Lexer and Pennisi published the first articles and books devoted to autologous fat grafting before 1920. Characteristics of Fat Grafting noted then, are just as true today:

This last point is important for the predicability of the fat grafting results. If you lose weight, the donor area gets thinner and the volume for the fat grafting is reduced. On the other hand, if you gain weight, your fat graft will enlarge. The problem with reliability of Fat Grafting for Breast Augmentation, both with initial take and long term stability, is one of the main reasons that Breast Implants rapidly replaced fat grafting and all other previous Breast Enhancing methods in the early 1960’s.

I perform fat grafting for selected Facial Augmentation, Brazilian Butt Lifts and to the breast for localized volume loss. Problem areas, like the dents left after a large breast biopsy, do not respond well to Breast Implants, and fat grafting can be tailored to selectively fill concavities. Although some progress has been made, for significantly enlarging an otherwise normal breast, breast implants remain the safest, most reliable and least traumatic choice.

The Brazilian Butt Lift has been on the rise in the US for the last ten years. The technique allows not only for buttocks enlargement, but for reshaping the buttocks. The before image on the left shows square buttocks which are asymmetrical, too full up top and yet empty laterally, especially on the left. The after image on the right shows more shapely female buttocks with a rounder fullness, smooth contours and better symmetry. The end result is an hourglass figure.

There is much more to discuss about Fat Grafting. Other ways that Fat Transfer is used, and the common areas treated will be discussed in the next two posts. Also, coming next week, I illuminate some problems often left out of the discussion. Understanding the downsides and the limitations of Fat Transplantation is an important part of making an informed decision.

If you would like to schedule a consultation appointment for Fat Grafting or Breast Augmentation, please give me a call at (925) 943-6353. Our San Francisco Bay Area Plastic Surgery office is open weekdays 9 AM to 5 PM.