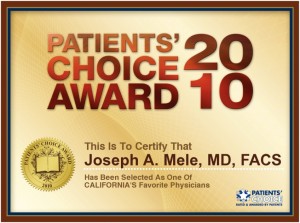 Here is an excerpt from the award letter:

Congratulations on receiving the Patients’ Choice Award again in 2010!

Your patients have selected you for the Patients’ Choice Award for 2010. You are a member of an elite group. More than 100,000 patient reviews and ratings are gathered each month, and this top rating has only been awarded to you and a select few of the nation’s most beloved doctors. Congratulations.

While physicians generally receive positive feedback from their patients, only a select few receive rave reviews. Of those with high praise, only physicians like yourself – with near perfect scores – have been voted by their patients for this honor.

In fact, of the nation’s 720,000 active physicians, less than six percent were accorded this honor by their patients in 2010.

You are, indeed, the Patient’s Choice; a physician so highly regarded by their patients that they feel the need to talk to others about the positive influence of your work.

Your patients have taken the time to compliment you in areas such as: your bedside manner, the amount of time you spend with them, the courtesy of your staff, appropriate follow-up, and their overall opinion of you as a physician. Quite simply, you are one of the best!

So, a big thank you to my patients for taking the time to rate us, and a congratulations to my staff for providing superior service in our extremely competitive Walnut Creek Plastic Surgery market.