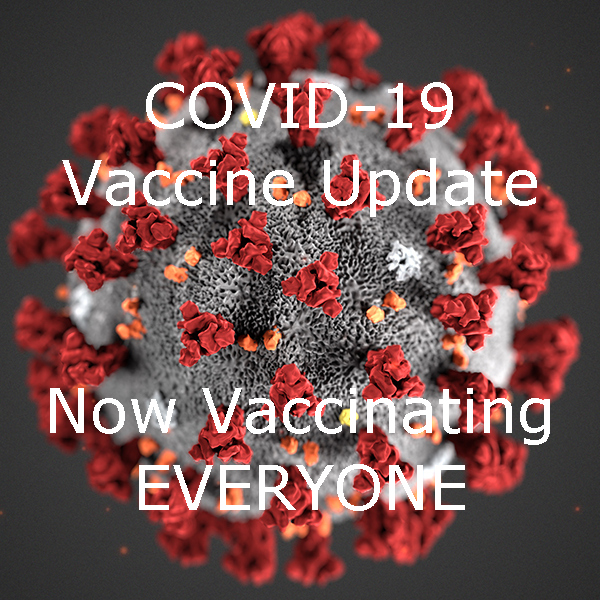 In the US, the COVID-19 vaccine is now available for everyone. So how is the battle against the virus going?

Global cases of COVID-19 passed 152 million last week. The US death toll has passed 576,000. This represents over one sixth of the 3.2 million worldwide COVID-19 deaths. In Brazil, the death toll has reached 400,000. While India has over 200,000 deaths, it is also in the midst of a surge which is outstripping its national resources. Although there is still much pain to be felt in battling COVID-19, there is also light upon the horizon. 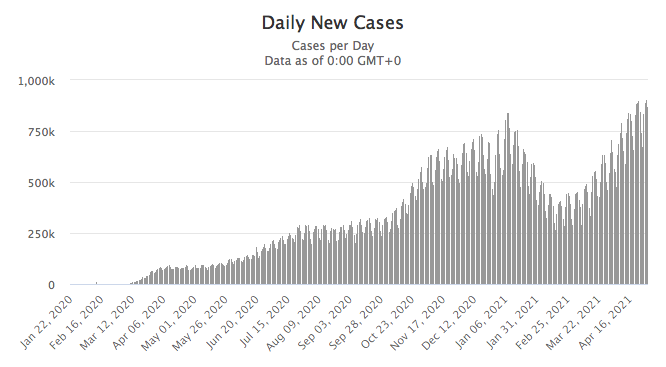 May 2021 Worldwide COVID-19 cases continue to climb. The tiny blip on the left is the initial outbreak in Wuhan.

As the virus spreads over the planet, the number of daily cases continues to climb. Above is a plot of the daily new cases from around the world. The initial Wuhan outbreak is barely visible to the left. Had containment occurred, the world would not be suffering the consequences. Unfortunately, this is not what happened. On the other hand, comparing the case numbers above to the death rates below provides evidence of how far medicine has come in responding to the coronavirus threat. 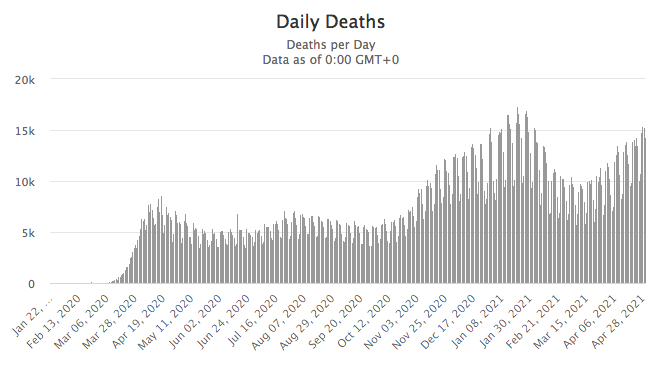 Worldwide COVID-19 deaths continue to climb. Sadly, we have not reached the peak infection rate yet, but this may be changing.

At first glance, the daily death rate appears to mirror the daily case rates above. As the daily cases rise, so do the daily deaths. The horizontal scale of time is the same on the two plots; however, the difference in the scale of the case/death numbers obscures the remarkable amount of progress made in preventing death in patients with COVID-19 infections. 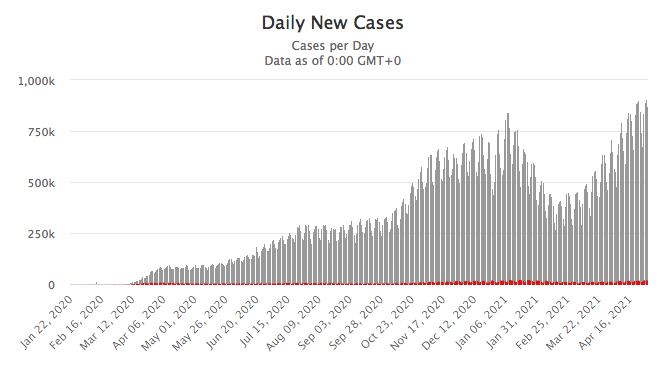 In this plot, the daily cases are in grey and the daily deaths are in red using the same scales for both. While cases have increased over 10-fold, the number of deaths has only doubled.

Thanks to better and more effective medical care, as the number of cases have increased, the death rate for those infected has decreased. From the data above, the death rate was 8.8% in April, 2020, and has dropped to 1.5% in April, 2021. More people may be getting sick, but fewer are dying.

While better treatment outcomes is good, preventing the disease altogether is even better. Masks, good hygiene and isolation have been shown to help decrease the virus’s spread. These methods have been around for hundreds of years, and are still used today in hospitals to help prevent the spread of resistant infections. Unfortunately, people naturally fatigue from these methods, especially when the virus is invisible and we are not confronted with the deaths the virus causes every day.

Wearing masks has become normal, and it’s pretty easy to do now that masks are readily available. Washing hands is harder, but the availability of sanitizing sprays and lotions has helped. Isolation is a killer in its own right. Isolation is mentally fatiguing and has lead to an increase in depression, alcoholism, drug abuse and suicide over the last year. The inability to socialize normally, not to mention earn a living, are sources of stress for most of us.

If only there was something that would allow us to move about freely in public, socialize and conduct business, that requires no daily effort, yet still protects us from COVID-19. Well there is. Vaccination is the clearest path to beating the coronavirus, and the evidence is in the chart below.

The US death rate mimics the worldwide death rate until January. With the introduction of potent, effective vaccines, the death rate has fallen precipitously, but it is still not zero.

Comparing the worldwide death rate to the US death rate shows a divergence in the curves beginning in February of 2021. The current spike in cases seen in India and Brazil is not occurring in the US. In fact, the US death rate is declining. The most likely reason for this is immunity.

Thanks to operation warp speed, and the cooperation of other developed nations providing large amounts of both resources and money, vaccines are available for COVID-19. The speed at which these vaccines have been made is historic. Until COVID-19, humankind has never had the ability to develop, nevermind administer, a vaccine during a pandemic.

The US has given 240 million doses to its citizens and 101 million Americans are fully vaccinated. This is 31% of the population. Add to this, the number of people who have survived the disease, over 88 million, now we are talking over half the population with immunity. This is helping to slow the spread of the disease in the US, and if enough people are vaccinated, COVID-19 may go away forever.

3.4% of the population vaccinated, but the distribution is not homogenous. Israel is in the lead with over 56% of its population fully vaccinated. The death curve in Israel looks like the US death rate curve, in that it is currently rapidly declining. Israel’s current number of daily new cases is 100.

At 6.4%, Brazil is also better vaccinated than the rest world, but the country still has a long way to go. Brazil experienced a large surge in cases in April, and it is unclear if the death rate has peaked. Brazil’s current number of daily new cases is 60,000.

At 1.9%, India is behind the world in providing vaccinations to its population. The number of new cases has gone from 10,000 in mid February to 402,000 a day currently. The Indian surge is so rapid and so large that it is overwhelming the country’s resources. At lack of resources that will likely decrease survival.

In contrast, the US peaked with a daily average of 300,000 new cases on January 8, 2021 and decreased to 50,000 a day over the last week. Still a deadly problem, but heading in the right direction as immunity spreads.

The three vaccines currently available in the US are made by Pfizer, Moderna and Johnsons & Johnson. The Pfizer and Moderna vaccines are made using a new method employing messenger RNA which provides immunity to the coronavirus spike. The J&J vaccine uses a harmless adenovirus to instruct human cells to make the SARS-2 spike protein, which then triggers an immune response.

China has produced five vaccines, three inactivated-virus vaccines from Sinovac and Sinopharm, a one-shot vaccine from CanSino, and the last from Gao’s team in partnership with Anhui Zhifei Longcom. The efficacy, as reported by their manufacturers, ranges from 50-79%. Chinese vaccines have been distributed to several dozen countries including Mexico, Turkey, Indonesia, Hungary, and Brazil. However, the companies have not publicly released their data, or published peer-reviewed data on the final stage clinical trial research and been criticized for a lack of transparency.

Russia has produced the Sputnik-V vaccine, a viral vector vaccine based on an adenovirus similar to the J&J vaccine. The claimed efficacy is 91.6% with no serious side effects. Last week, the Brazilian Health Regulatory Agency (Anvisa) denied approval for the Sputnik-V vaccine. The vaccine uses two different adenoviruses (which cause the common cold) to deliver the gene for the spike protein of SARS-CoV-2. Both adenoviruses are supposed to be stripped of a key gene that allows them to replicate; however, Anvisa found one of Sputnik-V’s two doses contains adenoviruses capable of replication.

These numbers will change as more data is collected and as the virus mutates, and I will continue to provide periodic updates.