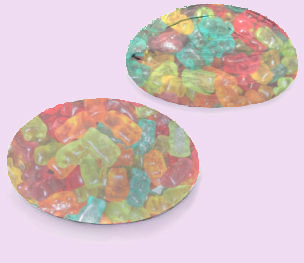 All silicone gel is cohesive. It’s a property of the gel that means it likes to stick to itself. Less cohesive gel is more like a liquid; however, the more cohesive the gel, the more it behaves like a solid. All silicone breast implants currently approved in the US are filled with cohesive silicone gel. They are manufactured to remain soft, but more toward the solid end of the spectrum. Since the gel is cohesive is resists flow, or gel migration in case of a leak. When cohesive gel implants are punctured, the gel does not run out like water. When the implant is squeezed, the gel mushrooms out of the hole, and often retracts back inside the implant when the pressure is released.

Gummy bear (Gummi-bear) form-stable or highly cohesive gel breast implants are soft solids. They cannot leak, and hold their shape. The consistency is like that of a stress ball. Soft enough to squeeze, yet they go back to their original shape when the pressure is released. Since they are solid, they require a larger incision during the breast augmentation surgery. Since they are shaped, when they rotate, they can distort the shape of the breast as described below. These are not currently FDA approved, despite the fact that they are almost the same as the current cohesive gel implants, and that all the information the FDA requested was supplied several years ago.

So what is the difference between these two types of silicone gel breast implants?

The outer shell of both Cohesive Gel Silicone Breast Implants and Gummy-bear Silicone Breast Implants is made of a tough flexible silicone solid. The shell is made to resist damage and inhibit gel bleed. This is less of an issue with the Gummy-Bear implants, as the center, while soft, is essentially a solid and does not flow. For silicone gel implants, the greater the resistance to damage, the fewer leaks. Moreover, reducing gel bleed means the gel cannot seep between the molecules of the shell and leak out, like helium escaping a balloon, just much slower.

Since most Gummy Bear implants are shaped, most the shells of Gummy Bear Breast Implants are textured (fuzzy). This allows the breast implant’s surface to adhere to the inside of the capsule that forms around the implant, like velcro. This adherence is very important for shaped breast implants, because it reduces the risk of the implant rotating into a less flattering orientation. When a shaped implant is properly aligned, a tear drop shaped breast augmentation is the result. This will provide maximum fullness and projection at the bottom of the breast where is belongs. A shaped implant is most important in cases of breast reconstruction, but may be helpful when the volume of natural breast tissue is very small. When a shaped implant rotates, and this can occur as much as 10% of the time, the bottom rotates outward, around to the sides, giving an odd lateral fullness and reduced cleavage. Texturing and precise surgical technique are important to minimize rotational deformities.

When an implant is round, texturing is not necessary to prevent rotation. The shape of the breast is not affected by the implant’s rotation. With silicone gel filled implants, gravity tends to bring the more liquid center down, no matter how the implant’s shell may spin. Cohesive gel implants are most often round, and round implants do not usually require texturing to prevent rotational deformities.

The biggest difference between Cohesive Gel Silicone Breast Implants and Gummy-bear Silicone Breast Implants is the filling. Both types of breast implants are filled with medical grade silicone. The difference is the viscosity of the gel. Cohesive gel implants have a viscosity somewhere between liquid and solid. The silicone gel inside a Cohesive Gel Implant does not flow like water. It will not squirt, or even freely run, if the tough outer shell is punctured. The cohesive gel likes itself, and wants to remain together. It can be forced out with pressure, so it is not a solid; however, the newer cohesive gel implants are much easier to remove after a rupture than their more liquid-like predecessors.

While both resist flow, a gummy bear implant’s filling is the consistency of its namesake. It is a soft solid that has memory. It can be compressed, but will return to its original shape spontaneously. Even when cut in half, the semi-domes will maintain their shape. If compressed, they will flatten, but when the pressure is released, the semi-dome shape will return. The term for this is form-stable. The form stable breast implants’ inability to leak offers a significant advantage.

Gummy-Bear Breast Implant Availability in the US

For San Francisco Bay Area Breast Implant patients the wait for FDA approval of the gummy-bear breast implants continues. Each March, there are rumors of impending approval, and in 2012, the rumors are again stirring. There has been a long delay between fact finding and decision making, but eventually the US should follow the lead of the rest of the world.

As much as I would like the FDA to make its decision, I am thankful for our FDA. It protected American women, and American Plastic Surgeons, from the recent European and South American problems with low quality Poly Implant Prothèses (PIP) breast implants. The PIP implants were made with non-medical grade silicone, and have failure rates of 10% at one year. This does not compare well with the US manufacturers’ breast implant failure rates of less than 1% at 3 years. Faulty PIP implants were used in about 300,000 women in 65 countries, and the recommendation is that they should all be removed or replaced. If you had breast augmentation surgery abroad, it is in your best interest to find out if your breast implants were manufactured by PIP. If so, find a Board Certified Plastic Surgeon near you for breast implant removal or replacement.

PIP saline filled breast implants were briefly available in the US. Since I have only used FDA approved breast implants, I never performed breast augmentation using PIP saline implants. I have had to replace them though, as they too leaked more frequently. Gummy-Bear highly cohesive silicone breast implants seem less controversial. They have the obvious benefit of not leaking, and much more specific scientific information is available about their safety. So FDA, if you’re reading this, how about a decision this March?