Today’s post reviews Breast Revision Surgery and the treatment for some of the more common Breast Augmentation Problems.

Capsular Contracture occurs when the normal pocket that holds the breast implant in place becomes tight. It can be tight all around the implant causing firmness and a reduction in the apparent size of the implant(s), or it can be along one side, pushing the implant out of position, usually upward.

These breast augmentation revision before and after pictures show grade III/IV capsular contracture of the right breast preoperatively, and the result of removing the tight capsule (capsulectomy) thus lowering the breast mound to match the left side. (Click image for uncensored view.)

This Breast Implant Malposition was treated with a complete capsulectomy, removal of the tight scar. The result is a softer breast, that is lowered back to its normal and symmetrical position. The areolae are also more symmetrical postoperatively. To see the nipple position, click or touch the picture above and the censoring will be removed. Tap again to replace it.

Symmastia is a specific type of Breast Implant Malposition where the implant(s) move toward the midline. It is more common in women with tighter skin and larger, high profile breast implants. Just like raising the towers on the Golden Gate Bridge would raise the bridge’s cables across the mouth of the San Francisco Bay, the high profile breast implants have raised the skin across the sternum causing a Uniboob Deformity or “Bread Loafing”. In addition, this patient has “bottoming-out” of her breast implants, greater on her right side. 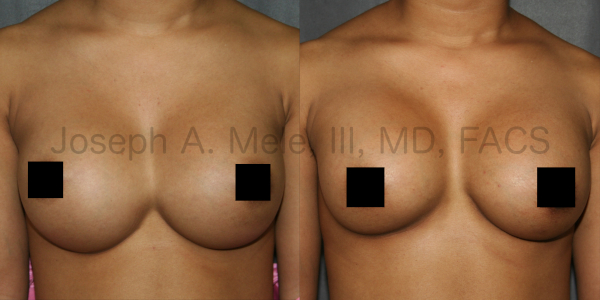 These breast augmentation revision before and after pictures show symmastia of the breasts and bottoming out (right greater than left) preoperatively. The after photo shows the result of symmastia repair and breast implant replacement with smaller breast implants and raising of the inframammary folds (IMFs) thus getting rid of the uniboob bread-loafing of the implants in the midline. (Click image for uncensored view.)

The Symmastia Deformity was corrected by both repairing the damage and addressing the original problem to prevent recurrence. The damage was repaired by closing the original capsule medially, forming a pseudoneopocket in the correct anatomical position and reinforcing the repair. Since the original cause was breast implants too large for the chest, they were replaced with smaller implants. The after picture shows that the breasts have been elevated and separated into two separate breast mounds. Breast symmetry is improved and the reduction in breast implant size should help to maintain the superior cosmetic result.

Breast Implant Exposure and Breast Implant Infections are emergencies, and require prompt surgical intervention. In the picture below, the square area at the base of her left breast is the lower edge of the breast implant which is about to erode through the breast skin. Once exposed, infection is inevitable, so the implant was removed promptly to prevent this eventuality. 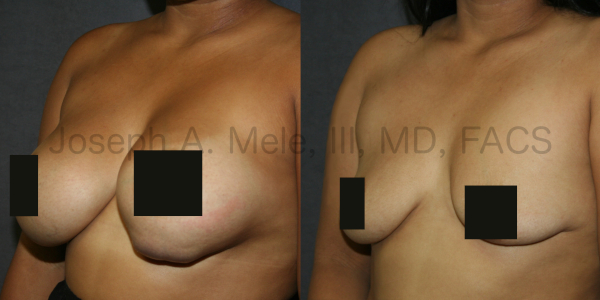 These breast augmentation revision before and after pictures show stage one of treatment for breast implant exposure. Once an implant is exposed, it requires removal to prevent infection and sepsis. The after photo reveals that the left breast was smaller before breast augmentation, confirmed by the removal of a larger breast implant during surgery. (Click image for uncensored view.)

An inframammary incision was used to remove the breast implant, and the damaged skin at the base of the breast was also removed to allow for a secure closure. Her left breast implant was larger than the right, because her left breast was smaller than her right breast before Breast Augmentation. The size discrepancy is apparent in the after picture

After breast implant infection or exposure, a minimum of three months is allowed to pass before replacing the breast implant. This is to reduce the risk of another infection. After three months, the patient returned to the operating room for delayed Breast Implant Replacement.

The before and after pictures above show the results of the second stage of reconstruction. The breast implants were replaced without complications, and the patient was happy to have her figure back.

If you are considering Breast Augmentation Revision be certain to consult with an experienced and Board Certified Plastic Surgeon in your area.

If you are in the San Francisco Bay Area, call (925) 943-6353, to schedule a private consultation appointment in my Walnut Creek, CA, plastic surgery office.