The word Gynecomastia was first used in the 1880’s and is formed from three latin roots:

Put them all together and we get Gynecomastia or female breast disease, but women can’t get it. The real problem with Gynecomastia is that it happens to men.

Gynecomastia Reduction Before and After Pictures

Gynecomastia Reduction Surgery is designed to masculinize the chest.

Gynecomastia Comes in all Shapes and Sizes

Gynecomastia presents as a wide range of problems. In its most benign form, it is a small, firm swelling of the male breasts, isolated to the area behind the nipple. In pubescent males, this may resolve on its own after a few years as hormones stabilize. The most severe forms of Male Breast Enlargement can be seen on popular weight loss shows like The Biggest Loser. In extreme cases, the Gynecomastia is so large that the skin and areola are stretched out of proportion.

The Gynecomastia Reduction Before and After Pictures above fall into the less extreme end of the Gynecomastia spectrum. In this case, the glandular tissue is localized in the lower chest, causing enlargement of the areola and projection of the nipple, best demonstrated on the lateral views below.

Gynecomastia Reduction Before and After Lateral Views (Side Views) 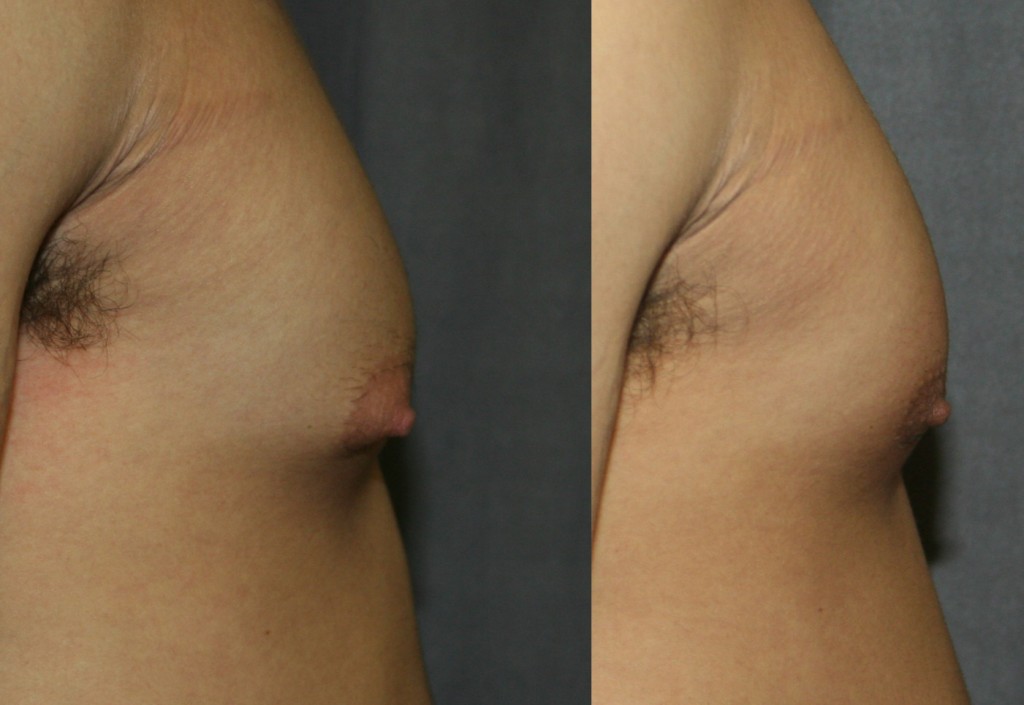 Gynecomastia isolated to the area beneath the nipple can cause puffy nipples. Gynecomastia Reduction Surgery can provide a smooth, more masculine profile.

Even relatively small amounts of Gynecomastia can cause significant embarrassment, and relegate us to wearing only loose, baggy shirts. The Gynecomastia Reduction before and after pictures above demonstrate the significant amount of nipple projection that even small, localized Gynecomastia can cause. By removing the firm breast tissue located behind the nipple, the male chest is contoured into a more masculine shape. A t-shirt will no longer be a source of embarrassment, and the improvement doesn’t stop there. Removing the excess breast tissue reduces the augmentation that stretches the skin and enlarges the areola. In the upper most view, the areolae appear to have been reduced, making my patient more comfortable going without a shirt. Moreover, he appears more physically fit.

At the other end of the Gynecomastia spectrum are breasts that are so enlarged that they permanently stretch the chest skin. Even if the excess breast tissue is removed, the skin is still bulky and can sag. This is seen often after massive weight loss. Even if all the excess breast tissue is eliminated with weight loss, the skin does not shrink to match the new and improved contours, and the breasts may still appear large. In these cases, the excess skin needs to be addressed.

The pictures above show what can happen when traditional Male Breast Reduction techniques are used in extreme circumstances. The patient shown above and below had already had Gynecomastia Reduction prior to my performing his Gynecomastia Revision Surgery. His initial procedure removed breast tissue; however, he was left with obvious indentations beneath his nipples, and the excess skin along the lower chest and sides continued to inhibit him from going shirtless and even wearing certain clothes.

This patient had prior gynecomastia reduction, with improvement in the size of the chest; however, he was left with indented nipples from over resection, and the excess skin was never addressed. By replacing tissue beneath the nipples, and removing the excess skin, a more aesthetic result is obtained.

The indentations behind the nipples in the above patient were the result of previous Gynecomastia Surgery. He presented with misshapen areolae and obvious concavities in the center of his chest. The contour irregularities were further compounded by residual breast tissue and fat around the periphery of the breast and excess skin sagging along the lower border of the breasts causing additional fullness. After his Gynecomastia Consultation, Gynecomastia Revision Surgery was performed. An incision was made beneath the breasts along the inframammary fold. A flap of fat was used to smooth the central breast depressions, Liposuction and direct excision were used to further reduce the size of the breasts and sides, and by removing the excess skin, the chest contour is now smooth and flat. Thankfully, not all Male Breast Reduction Surgery is this complicated. I am glad to say, this patient is now happy, and he can wear tight t-shirts without worry.

Wherever you may fit in the spectrum of Gynecomastia, we can help. To view television appearances I have made discussing Gynecomastia click this link: Gynecomastia Videos.

The most important step in treating Gynecomastia is selecting a qualified Board Certified Plastic Surgeon. They should objectively evaluate your areas of concern, and formulate a treatment plan that works best for your needs.

If you are in the San Francisco Bay Area, and would like to schedule a personalized Gynecomastia consultation, just give my East Bay Plastic Surgery office a call at (925) 943-6353. You can also ask questions by completing the contact form on the left.